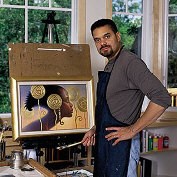 Represented by The Collection Shop Updated on Thursday, April 22, 2021

Blackshear settled in Kansas City, where he became head illustrator at the prestigious Godbold/Richter Studio. A year later, he began a prosperous freelance career, illustrating many advertisements, several U.S. Postal Service stamp collectionsone called "Black Heritage," another on classic movies, and a third on jazz musiciansand several series of Hamilton Group collector s plates featuring scenes from Star Wars, Star Trek, and The Wizard of Oz. Although he was successful, he was dissatisfied and decided to pursue a career in fine art.

Thomas Blackshear 1988 Wizard Of Oz The Great And Powerful Oz

Thomas Blackshear Beauty And The Beast

Thomas Blackshear For You