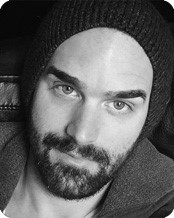 Represented by The Collection Shop Updated on Wednesday, June 29, 2022

Franco is an exclusively self-taught artist, who began drawing at the age of three. He has known ever since, that being an artist is the only creative outlet in life he desires. His grandfather created impeccable paintings of British and French history, this is unquestionably where Franco inherited his passion to paint. Initially, Franco favored drawing, Franco pulled inspiration from beloved painters such as Salvador Dali, Michelangelo, and da Vinci. as he formed a passion for surrealism. He served in the US Army from 2006-2010, with 101st Infantry, out of Fort Campbell, Kentucky. During his stint in the army, he deployed to Iraq for 15 months. While overseas, he had to put his artistic passion on hold. However, upon returning in 2010, he picked up his paint brush, springing him forward onto his journey of becoming a fine artist. His artistic efforts focused on the fantasy genre, and of course, his long-time childhood love of Disney characters and storytelling. He dreamed of one day becoming a Disney artist and made that his greatest life goal. Now, a reality, hes determined to create the most beautiful, classic Disney art, yet with a flare, which makes them only recognizable as a Jared Franco piece. Ive spent most of my life watching and studying Disney movies, and still do now. From my earliest memories I remember being truly inspired by the art and found myself watching entire movies over and over again -- admiring and studying the artwork. This passion drove me to create my own paintings, says Franco. I never imagined Id be doing it for Disney Fine Art.

Jared Franco Merlin's Domain From The Sword in the Stone

Jared Franco Pooh and His Balloon

Jared Franco Pooh and His Balloon

Jared Franco Tiana's Enchantment From The Princess and the Frog