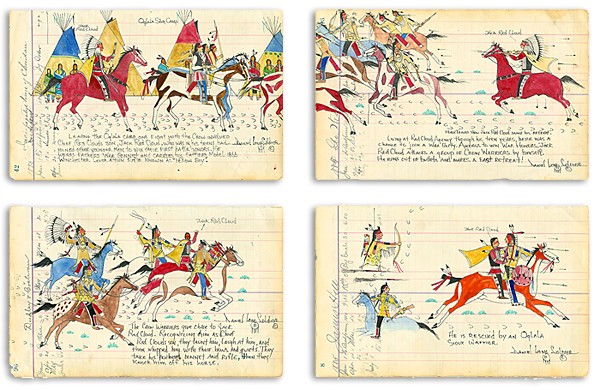 Daniel Long Soldier The Story of Jack Red Cloud Limited Edition  Print is eligible for layaway in 3 equal payments of $75.00 over 60 days.

As an option you may also pay for Daniel Long Soldier The Story of Jack Red Cloud Limited Edition - Print using Paypal or with your Amazon Account(*select items). Please note that all orders must be delivered to a physical address verified by Paypal or Amazon. These options are not applicable for orders to be delivered to Military or International destinations.
For Military APO/FPO orders please use our standard checkout. For International Delivery, please click on the International Shipping Icon to see the landed cost to your country. No Sales Tax Except In The State Of Florida.

NOTES: The Lakota Wicitowa (Lakota Paintings) of Daniel Long Soldier are one of the purest expressions of American art we’ve ever presented. The naïve drawing style, created on pages of an authentic late 1800’s ledger, immediately raise the question of whether or not we were looking at something created 150 years ago or today.

Long Soldier brings us what no other artist can: he grew up hearing the stories and exploits of the Oglala Sioux told as family histories. Just as we know what Uncle Jack did during WWII, he knows what his Grandfather did at Little Bighorn.

The four-panel story of Jack Red Cloud is just such an example. As an adult, Red Cloud was recognized as a leader and orator of the Oglala. As a young man he was as eager as any other young brave to prove his worth in battle. As the son of the renowned chief Red Cloud, he felt the pressure even more. Wearing his father’s war bonnet and carrying his gun Yellow Boy, Jack and other teen warriors rode with a war party against the Crow.

Jack bravely attacked a group of Crow by himself, but found himself in trouble when he ran out of ammunition for Yellow Boy. Recognized as the chief’s son he became the target of the Crow. In the ensuing chase, he was knocked off his horse as the Crow counted coup and he lost his father’s bonnet and rifle. He was saved by a fellow Oglala warrior.

Daniel Long Soldier’s four-panel Story of Jack Red Cloud has been combined onto a single sheet for presentation as this Greenwich Workshop Fine Art Edition Giclèe Paper. This 29 ½ x 21 print, in an edition of 50, is as authentic piece of fine art and Plain’s history as any collector could hope to own.

1. Leaving the camp, one fight with the Crow involved Chief Red Clouds son, Jack Red Cloud who was in his teens had joined other younger men to win their first battle honors. He wears fathers war bonnet and carries his fathers model 1866 Winchester lever action rifle know as “Yellow Boy”
2. Living at Red Cloud Agency through his teen years, here was a chance to join a war party. Anxious to win honors, Jack Red Cloud attacks a group of Crow warriors by himself. He runs out of bullets and makes a fast retreat.
3. The Crow warriors give chase to Jack Red Cloud. Recognizing him as Chief Red Clouds son, they taunt him, laugh at him and then whipped him with their bows and quirts. They take his fathers bonnet and rifle, then they knock him off his horse.
4. He is rescued by an Oglala Sioux warrior
.


The Story of Jack Red Cloud Limited Edition  Print by Daniel Long Soldier  is signed by the artist and comes with a certificate of authenticity. 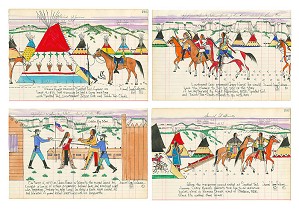 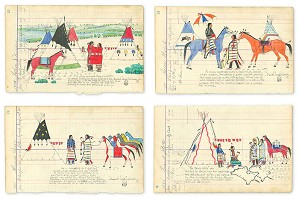 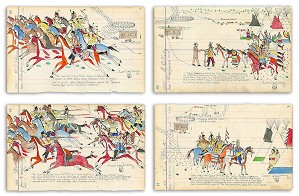 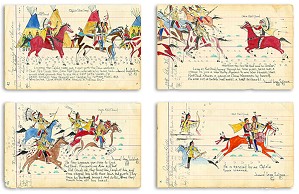