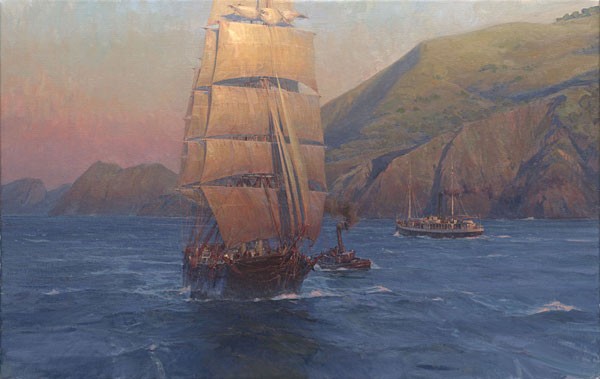 Christopher Blossom Sunrise in the Golden Gate Down Easter Benjamin F. Packard MASTERWORK EDITION ON  Canvas is eligible for layaway in 3 equal payments of $250.00 over 60 days.

As an option you may also pay for Christopher Blossom Sunrise in the Golden Gate Down Easter Benjamin F. Packard MASTERWORK EDITION ON - Canvas using Paypal or with your Amazon Account(*select items). Please note that all orders must be delivered to a physical address verified by Paypal or Amazon. These options are not applicable for orders to be delivered to Military or International destinations.
For Military APO/FPO orders please use our standard checkout. For International Delivery, please click on the International Shipping Icon to see the landed cost to your country. No Sales Tax Except In The State Of Florida.

The top honor at the Prix de West art exhibition and sale, hosted by the National Cowboy and Heritage Museum is the Prix de West Purchase Award, the work chosen to be purchased for the Museum’s permanent collection. It is one of the most coveted prizes in the field today. Christopher Blossom’s Sunrise in the Golden Gate; Down Easter Benjamin F. Packard was selected for the award from a field of 110 of the country’s finest artists who presented 346 paintings at this year’s show. Past winners of this award include Howard Terpning«, Morgan Weistling, Curt Walters, Tom Lovell, Wilson Hurley, Tucker Smith and James Reynolds.

Now you can own one of the few large-format Masterwork® Fine Art GiclTe Canvases of this award-winning image. A Greenwich Workshop artist since 1983, Chris is the most highly regarded and collected maritime artist painting today.
A work of Christopher Blossom’s fine art is considered the height of craftsmanship in maritime art. In his 21 years of participation in the Prix De West, Blossom has three times been chosen by his fellow artists for the Robert Lougheed Award. His bold design and impeccable rendering capture the mood and mystical experience of men at sea.

Each work is also the work of an ardent historian, as is apparent in Blossom's telling of the story behind the painting:

As the sun just peeks over the mountains to the east, the ship Benjamin F. Packard passes through the Golden Gate and into San Francisco Bay.

Built in Maine in 1883, the Benjamin F. Packard was a type of vessel known as a Down Easter. Named for their place of building, down east where sufficient stands of timber still stood near the shipyards, these last of the wooden square rigged ships were larger with more cargo capacity than their predecessors, the clipper ships. They were able to carry sail longer thanks to their rugged construction and were capable of very credible passage times. These attributes made them a commercially viable option particularly on the long and rough Cape Horn passages until they were supplanted by steam around the end of the century.

The Benjamin F. Packard had a long and varied life and was a regular visitor to San Francisco, having been built for the trade around Cape Horn to the west coast. Her first few years, the Packard was under the management of her builders, Goss, Sawyer & Packard of Bath Maine. In 1887, the managing ownership was purchased by Arthur Sewall & Company also of Bath, under whose management she remained for the rest of her Cape Horn career. In 1909, she was sold to the Northwest Fisheries Co. of Port Townsend, Washington for the salmon packing business. With this change she sailed north each year for the season until 1924 when she was sold and made the voyage back to New York once again, this time under tow with a load of lumber. After her return to the east coast, with several changes of ownership and continued deterioration, she eventually became one of the centerpieces at the amusement park Rye Playland, being used, ignominiously, as a ‘pirate ship’ for years. In 1939, she was dismantled and towed to the dumping grounds of Eaton’s Neck, NY and sunk. Fortunately, prior to this, her main cabin was dismantled and saved and is now on exhibit at Mystic Seaport Museum in Connecticut.
.


Sunrise in the Golden Gate Down Easter Benjamin F. Packard MASTERWORK EDITION ON  Canvas by Christopher Blossom  is signed by the artist and comes with a certificate of authenticity.

When a child has a father and grandfather who are both well known illustrators, it is likely the offspring will also become an artist. And when a boy starts to sail at the age of six, it is also likely that the artist might choose the sea and sailing ships as his subject. Such was the case for Christopher Blossom, who, by the time he left the Parsons School of Design and Robert Bourke s Design Studio, could visualize a finished boat from only its plans—and draw the craft from any angle. Before Blossom was twenty, he had sailed under square rig aboard the brigantine Young America. Known for his complex, detailed compositions of ships at sea, Blossom combines his appreciation for the beauty and the menace of the sea with his love of maritime history and ship construction. Before Blossom paints a vessel, he is likely to study the ship s blueprint to learn about it hull design, length, tonnage and deck layout. Blossom s historically accurate ships and harbors are combined with color, light and composition to capture the mood of a voyage and convey the essence of the seafaring experience. At the age of twenty, he won a Gold Medal at the Society of Illustrators Scholarship Exhibition. His dual vocation of experiencing the sea and then painting both nautical history and some of the greatest modern places to sail, was truly launched. Blossom became both a charter member and an artist of the American Society of Marine Artists, serving as its president from 1983 to 1986. His awards include a Gold Medal from the National Academy of Western Art for his painting of ships in Monterey. Saluted as an undisputed master, Blossom has exhibited his art at the Gilcrease Museum, the Colorado Museum of History, the prestigious Prix de West Invitational and the Artists of America show. Blossom continues to achieve artistic honors including the Robert Lougheed Memorial Award at the 2001 Prix de West. Almost the only time he isn t painting is when he is sailing, visiting ports of call in Maine, Connecticut, Rhode Island, Maryland, the Bahamas, California and Washington state. Blossom, who recently spent a year sailing around the Caribbean with his wife and two sons says of his love, "It s not a hobby, it s a way of life. When I look at the ocean, I get the same feeling pilots must get when they look to the sky." 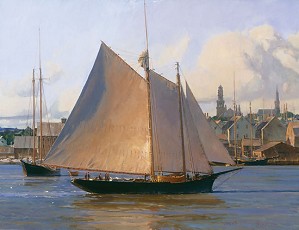 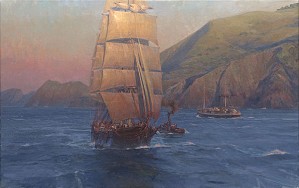 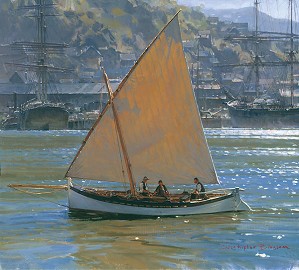 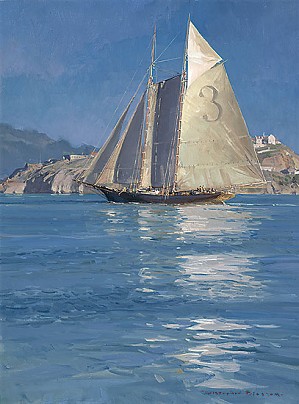 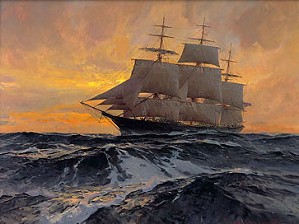 Christopher Blossom Witch Of The Wave 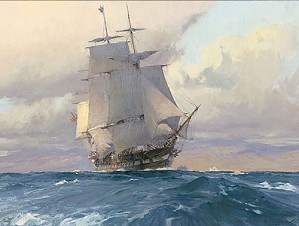