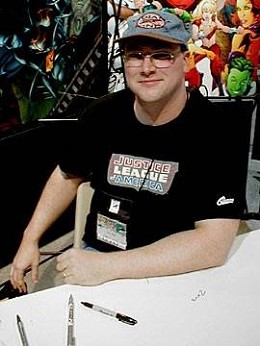 Represented by The Collection Shop Updated on Sunday, June 20, 2021

Born in Portland, Oregon, and raised in Lubbock, Texas, Alex made his artistic debut at three when, according to his mother, he grabbed a piece of paper and drew the contents of a television commercial he'd seen moments before. By age 13 he was scripting and drawing original comic books. Ten years later? He was hired by Marvel Comics to illustrate Marvel's central characters in the comic book event, Marvels (1994). Having established himself creatively and financially with superhero projects, Ross turned to the real world with Uncle Sam, a 96-page story that took a hard look at the dark side of American history. Like Marvels, the individual issues of Uncle Sam were collected into a single volume - first in hardcover, then in paperback - and remain in print today. Ross would eventually go on to win the Comic Buyer's Guide Award for Favorite Painter. He won so many times that the award was officially retired. Alex's work has celebrated the 60th anniversaries of Superman, Batman, Captain Marvel and Wonder Woman with fully painted, tabloid-sized books, depicting each of these characters using their powers to inspire humanity as well as help them. In recent years, Ross has applied his artistic skills to outside projects with comic book roots, including a limited-edition promotional poster for the Academy Awards, as well as becoming the first artist in over 30 years to be commissioned by Apple Corp. LTD to paint the Beatles. Having positioned his artwork squarely in center of Pop culture, it should be no surprise to see that Alex is now turning his attention toward beloved Disney characters. Having often been referred to as the Norman Rockwell of comics, Alexs expert style and classical sensibilities combine wonderfully with the spirit of Disney Fine Art, creating breathtaking works that are sure to delight fans of all ages. In a way, [approaching] the Disney characters is a new revelation for me to realize that I do have a connection-- I do have something I can offer and I have a passion for it. Of course, I grew up with a lot of these films and Im not going to cross certain lines [creativity]. I want to be respectful of the integrity of these characters and mostly I want to connect with that classic thing.