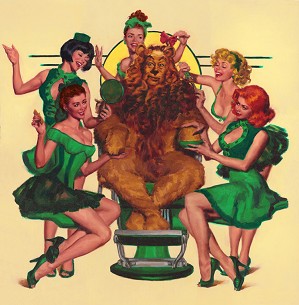 Glen Orbik Emerald Beauties From The Wizard Of OZ

Glen Orbik (1963 – May 11, 2015) was an American illustrator known for his fully painted paperback and comic covers, often executed in a noir style. In the 1970s, Orbik and his mother moved to Douglas County, Nevada. He is a 1981 graduate of Douglas High School in Minden, Nevada. He studied art at the California Art Institute then located in Encino, later Calabasas, California, and now located in Westlake Village. He studied under the school's founder, retired movie and advertisement illustrator Fred Fixler. Orbik eventually took over the classes when Fixler retired from teaching and taught figure drawing after returning from an extended hiatus.[citation needed] His work has been compared to Alex Ross and Robert McGinnis,[citation needed] and he was a popular teacher among fine art, comic, and video game artists.[citation needed] He most recently worked on a series of paperback covers for the Hard Case Crime series of novels. Orbik resided in Van Nuys, California.[1] He died on May 11, 2015 of cancer.