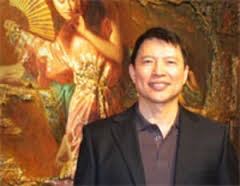 Represented by The Collection Shop Updated on Sunday, May 22, 2022

.After twenty years in the New York art scene, American artist George Tsui set out a creative journey into China in the pursuit of reaching the next level in his artistic career . The grand and splendid architect of the forbidden city and the mysterious and sensual character of the Dun Huang cave were the immediate inspiration for the first group of paintings George created. Always fascinated and attracted to the rare and exotic, elements of fantasy are often present in George s work. Chinese themes filled his imagination. The idea of creating his own brand of classic romanticism, unrestrained by conventional reality, was deeply attractive to him. His models always dressed in exquisite beautiful silk gowns from the artist s own collection of 20 authentic imperial dresses, and posed in romantic, luxurious surroundings with a variety of antiques, artifacts, jewelry, and exotic landscapes and birds George doesn t pretend to be painting the real thing but draws us into a fantasy where the signs of subterfuge are plain to see, as the artist describes: these pieces "employ a dual technique of painting and sculpture that is traditionally ornate yet abstract in the most modern sense." George was born in Hong Kong, and moved to New York in the late 60s, studying first at the School of Visual Arts and later majoring in oil painting at the Art Students League while working at NBC, he was awarded the prestigious 1997 Emmy Award for Best Individual Art and Craft. Included in his works of that period are some movie posters, also several paintings chosen for the 1984 Winter Olympics poster series, as well as limited edition art prints for the 1985 and 1986 Night of 100 Stars" event for a tribute to The Centennial of The Actor s Fund of America, the original art work with 100 celebrities signatures was owned by ABC Television Corp.