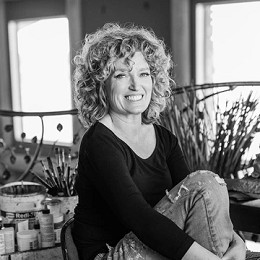 Denyse Klette's earliest memory of creating was when she was four and she spent hours copying the drawings out of her sister's 'How To Draw' book, which serendipitously was written by a Disney artist. When she was 8, Denyse came home from school and announced to her parents that she should quit grade 4 and become an artist since that is what she knew she would be. Her parents made her stay in school but she was selling her line drawings by grade five so she could have "donut and butter tart" money and by 16 she had her first cartoon strip published in two local newspapers. Although she smiles at her childhood memories, Denyse was serious about her art at that early of an age and has never wavered from this career choice going on 45 years. She also never did return the book to her sister and it sits proudly amongst her vast collection of Disney art books. Today, Denyses artwork is represented in three countries and has been featured prominently in galleries and private collections in North America. In 2006, a collection of 45 pieces was featured in the $40M Deerfoot Inn and Casino in Calgary, Alberta, Canada. For over 15 years she had the privilege to paint portraits of business people, politicians, celebrities and families from several different countries. Denyse co-created Belly Button Buddies; which grew from a series of award-winning books, into a live theatrical musical that over 100,000 children enjoyed. It was then developed into a childrens TV show that aired in Canada and the UK. In 2016, Denyse signed a three-book deal with Macmillan Publishing for a whimsical series of adult coloring books that has been distributed worldwide. Her artwork has also been widely licensed for home decor products, fabric, beachwear, bags, puzzles, playing cards, to name just a few. She has always loved sculpting but never had the time to pursue the medium to its fullest until the summer of 2017, when she was able to mentor under a talented bronze artist and her first bronze debuted at the Wyland Galleries of Florida. Denyse began mixing the two styles and began creating sculpted bias relief style paintings, which at times she adds Swarovski crystals. Because really can you ever have too much sparkle?? The pinnacle in her career was the day she signed to become the first Canadian artist to be published under the Disney Fine Art collection. To walk into my studio each day and know that I get to create the most magical characters is a dream come true.