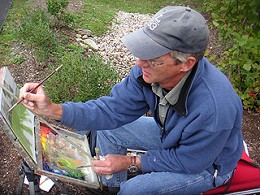 Represented by The Collection Shop Updated on Wednesday, October 5, 2022

Christopher Blossom Witch Of The Wave