As an option you may also pay for Virgil Ross Timber - Hand-Painted Limited Edition Cel using Paypal or with your Amazon Account(*select items). Please note that all orders must be delivered to a physical address verified by Paypal or Amazon. These options are not applicable for orders to be delivered to Military or International destinations.
For Military APO/FPO orders please use our standard checkout. For International Delivery, please click on the International Shipping Icon to see the landed cost to your country. No Sales Tax Except In The State Of Florida.

NOTES: Classic Animator Virgil Ross created this limited edition inspired by the 1949 Warner Bros. cartoon, œBad Ol Puddy Tat. This image finds our quintessential Puddy Tat caught in the act, but once again, he is foiled by Tweety Bird. This edition was created from original Virgil Ross pencil drawings, the edition is hand-inked, hand painted and individually number in an edition size of 750 with 50 artists proofs. Backgrounds are lithograph printed on museum quality stock. Each piece is hand-signed by Virgil Ross.. 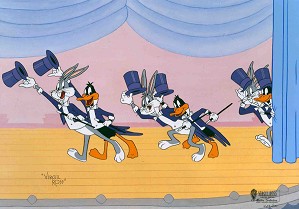 Virgil Ross Scuse Me, Pardon Me 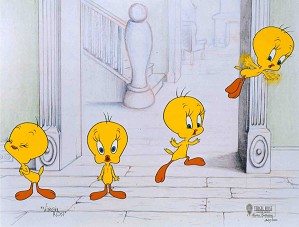