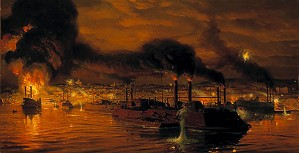 "1909 - 1997 A Native American finding a Raggedy Ann doll on a lonely western road. A man teaching his blonde, gingham-dressed, settler wife how to shoot a rifle. A trio of Indians warming their hands over the chimney of a snow-buried cabin in an otherwise empty landscape. These are just three of the stories told through the art of Tom Lovell, considered by his peers one of the deans of Western art. But that s not all. He was equally famous for his exciting and thought- provoking illustrations for such magazines as Life, The Saturday Evening Post and National Geographicas well as his stirring images of sweeping Civil War battles which were considered so definitive that they were telecast as part of the famous Public Television documentary on the conflict and published in the accompanying best-selling book. Lovell was the first artist to win the National Academy of Western Art s highest honor, the Prix de West, twice. He was elected to the Society of Illustrators Hall of Fame in 1974 and eventually named a Hall of Fame Laureate. In 1992, he was honored by both the National Academy of Western Art and the National Cowboy Hall of Fame with a Lifetime Achievement Award and a prestigious one-man retrospective show. He has left a lifetime of work that will influence, impress and instill emotion for years to come."