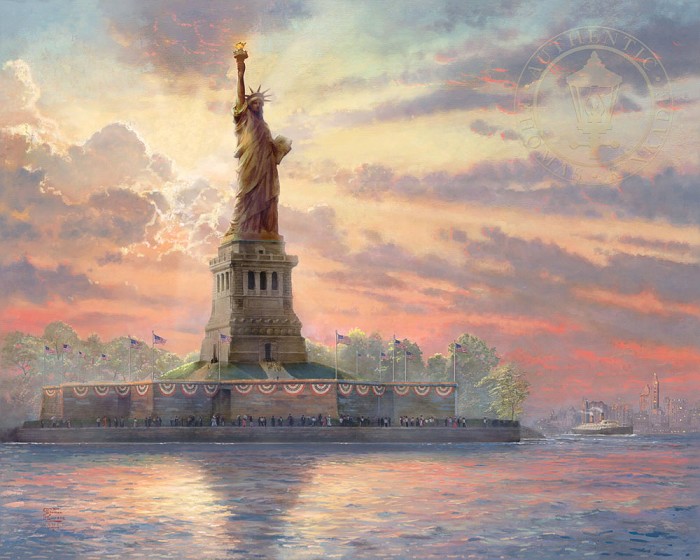 NOTES: Dedicated to Liberty. From its many beauties to its great freedoms, Thom regularly sought to capture the spirit and heart of our great country on canvas. Nowhere is that seen more clearly than in this painting from the Thomas Kinkade Vault, celebrating the symbol of freedom and democracy, the Statue of Liberty. Given to America in 1886 as a gift of friendship from the people of France, the statue greeted arriving immigrants with hopes of a new life in this land of opportunity. Sculpted in copper, the statue's original color has oxidized over decades into the green tones that we know today. In Dedicated to Liberty, Thomas Kinkade captured those early years of the statue, and the power and majesty behind this great symbol of freedom. Light breaks behind the statue illuminating the freedom that awaits all who come. A ship in the harbor carries families and the dreams of generations. A burgeoning city filled with opportunities awaits. The Statue of Liberty's official title is, "Liberty Enlightening the World." Enlightening the world with the light of freedom... from an artist whose simple message was... "Share The Light.".

Dedicated to Liberty  Giclee On Paper by Thomas Kinkade

In the very begiThomas Kinkade Photonning of his artistic career, Thomas Kinkade put his entire life savings into the printing of his first lithograph. Though at the time he was already an acclaimed illustrator, Thom found that he was inspired not by fame and fortune, but by the simple act of painting straight from the heart, putting on canvas the natural wonders and images that moved him most. It was this dedication and singular-minded focus on the ultimate goal of Sharing the Light™ that made Thomas Kinkade, a simple boy with a brush from the small country town of Placerville, California the most-collected living artist of his time. Throughout his life Thomas Kinkade shared his joy and used his paints in support of hospitals, schools, and humanitarian relief. Though the recipient of countless awards and honors, it was Thom’s profound sense of purpose that his art was not just an accessory, but also a ministry, that continues on as his legacy. From custom images that were sold for The Salvation Army, Hurricane Katrina relief, Rotary International, to donations that now grace the halls of St. Jude’s Children’s Research Hospital, the White House, The Vatican, and Britain’s Tate Museum, Thom raised hundreds of thousands of dollars over his lifetime for charity. 1996 - Decorating the Christmas tree with Nanette and their four daughters. 1996 – Decorating the Christmas tree with Nanette and their four daughters. Thomas Kinkade the artist was also a devout and loving family man. It was this devotion for his family that inspired him to add symbols of his love to his artwork. Numerous paintings contain hidden “N’s” representing Thom’s lovely wife Nanette and many other paintings include the numbers 5282 as tribute to their wedding date May 2, 1982. Thom’s four daughters were also included in his artistic process- after the birth of each of his daughters, Thom painted adoring images in each of their namesake; Evening at Merritt’s Cottage, Chandler’s Cottage, Winsor Manor and Everett’s Cottage. Thomas Kinkade, the Painter of Light™, emphasized simple pleasures and inspirational messages through his art – and the branded products created from that art. From textiles, to collectibles, to music and books, Thom gave credit to a higher power for both the ability and the inspiration to create his paintings. His goal as an artist, who was Christian, was to touch people of all faiths, to bring peace and joy into their lives through the images he had created. Thom’s dearest wish had always been that his artwork would be a messenger of hope and inspiration to others – a message to slow down, appreciate the little details in life, and to look for beauty in the world around us. As millions of collectors around the world sit back and enjoy his artwork in their homes, there is no doubt that Thomas Kinkade had indeed achieved his goal of Sharing the Light™. 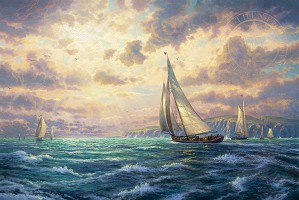 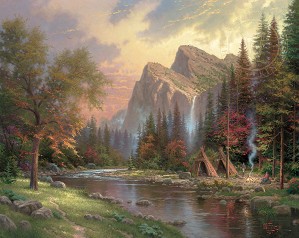 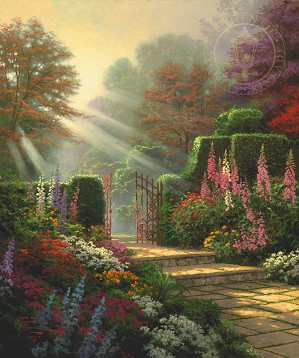 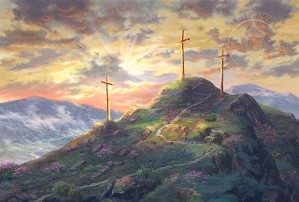 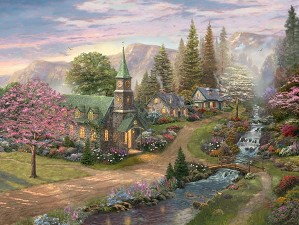