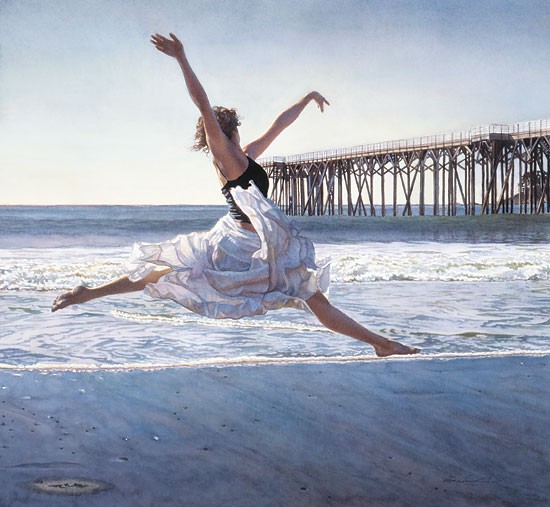 Steve Hanks To Dance Before the Sea and Sky  Canvas

Steve Hanks To Dance Before the Sea and Sky  Canvas is eligible for layaway in 3 equal payments of $231.67 over 60 days.

As an option you may also pay for Steve Hanks To Dance Before the Sea and Sky - Canvas using Paypal or with your Amazon Account(*select items). Please note that all orders must be delivered to a physical address verified by Paypal or Amazon. These options are not applicable for orders to be delivered to Military or International destinations.
For Military APO/FPO orders please use our standard checkout. For International Delivery, please click on the International Shipping Icon to see the landed cost to your country. No Sales Tax Except In The State Of Florida.

NOTES: I believe that art can be more than just pretty pictures. Art should bring comfort to people. It should be by our side when we go through good times and hard times, says Steve Hanks. Art should elicit a thought provoking examination of one's own life and place in the world.

We all experience pain, but there are great moments of pleasure all around us too. These moments may often be fleeting and get by us before we are able to fully comprehend their beauty and importance. I have tried to capture a few of these moments in paintings that can be savored for years to come.

The beauty of this joyful moment is infectious. Steve Hanks has succeeded in capturing that perfect, uplifting energy in To Dance Before the Sea and Sky..

To Dance Before the Sea and Sky  Canvas by Steve Hanks  is signed by the artist and comes with a certificate of authenticity.