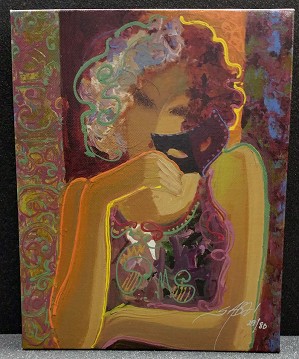 Born in Ahwaz, Iran, Sabzi started painting at the age of twelve; encouraged in his early progression as an artist by his parents and inspiring teachers. He earned a Bachelor of Science in Agricultural Engineering at the University of Jundi Shapur. "The best part of agriculture was the purity of its primal spaces," he says, explaining his early sensitivity to artistic concepts. Sabzi's early works were primarily realistic, exploring the historical and cultural themes of his homeland. His departure from Iran during the Khomeini regime brought him to Germany and then the United States. This exile provided him the opportunity to explore new artistic influences, and he began to work in abstract and figurative styles. Sabzi's subjects are almost always women  beautiful, graceful, taciturn and melancholy; they reflect love, mystery and solitude. His women are Madonnas, modern goddesses and martyred saints whose elongated forms suggest instability and internal conflict. According to Sabzi, their anonymous faces make them into religious icons that transcend and defy the demands of reality; reflecting warmth, charm, happiness, and his undisputed love and admiration for women. His paintings resonates both Eastern and Western philosophies. His rich Persian heritage provides him with ancient images, sentimental Persian themes and memories of innocence. He draws from the Western influence of modernism found in the works of Klee, Cezanne, Matisse and Bonnard. His debt to modernism, especially to Matisse, is irrefutable. Earthy hues of pale greens, yellows, purples and reds illuminate the settings and inspire the forms with unique inner vibrations. Though schematic, the treatment of the human face as luminous geometric planes is a profound statement of the artist's quest for spirituality. Sabzi goes beyond Matisse and creates spatially-revolving, post-modern worlds. Images reflected in mirrors assume a life of their own. The effect is a powerful multiplicity of emotional representation. Here the fantastic is treated as ordinary and the rich fabrics of the paintings resonate intimacy. An accomplished abstract painter, Sabzi's passion for the spiritual is represented in the open spaces, symbolism and intricate patterns that make up the backgrounds of his compositions. Juxtaposing the complex feelings, body language and attitudes of his predominantly female figures against a backdrop of shapes and forms in space, Sabzi uses texture, lines and color to make artistic statements about love and beauty.