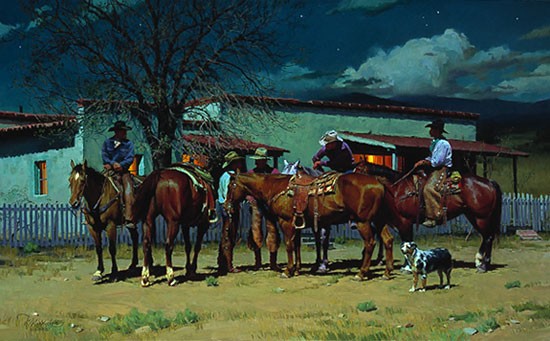 NOTES: We think we’ve corralled the Best of the West when it comes to artists, and there’s no denying that a significant number belong to the prestigious Cowboy Artists of America organization. Recent inductee R.S. Riddick earned the honor by creating beautifully composed, contemporary images of Southwestern cultures including Native American, Mexican American peoples and western American ranch life. Of Early to Bed, Early to Ride, Ron says, Springtime on the ranch is calving season. Cows often give birth in the nighttime hours and sometimes they have trouble, which means cowhands have to saddle up and head out to the range before dawn. After a long hard day of work, a cowboy needs a good hot meal and a bunk for his tired body, so he can get up before the sun tomorrow—early to bed, early to ride..

Early To Bed Early To Ride Limited Edition Print   by Ron S. Riddick  is signed by the artist and comes with a certificate of authenticity.

Born and raised in sunny Santa Monica, California, Ron was the son of an art director at Prudential Insurance—so he had access to the tools of commercial art. While in high school, he took the extra challenge of night classes at the Los Angeles Art Center and College of Design, where he found that he was quick to pick up both classic and new techniques in continuing to improve his skills. He then left school to work in a printmaking atelier, but it wasn t until he began to study with Russian artist Sergei Bongart that he was truly inspired. He says of Bongart "I sensed something in Bongart I lacked: the gift of painting from the heart and spirit. But Sergei did more than instruct me in painting. He shared his love of music, literature, poetry, nature, life and showed me the historic connections." Bongart was not the only artistic influence in Ron s life—his work is often compared favorably to John Singer Sargent. He has the same ability to capture on canvas and paper the personality and life of those he paints. Riddick now makes Tuscon, Arizona his home. His recent accomplishments include traveling to Europe twice where he invested countless hours of study in Europe s finest museums, galleries and collections—and where he painted on location in cities and in the countrysides of Portugal, Spain, Italy and France. He shows his work at select galleries and shows throughout the country and, along with many other awards and accolades, is an Artist of America Master Painter and a member of the Cowboy Artists of America. 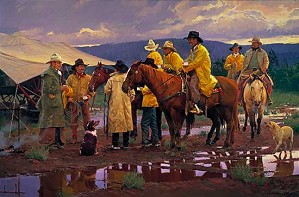 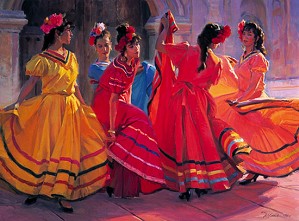 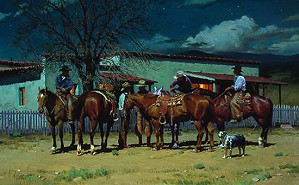