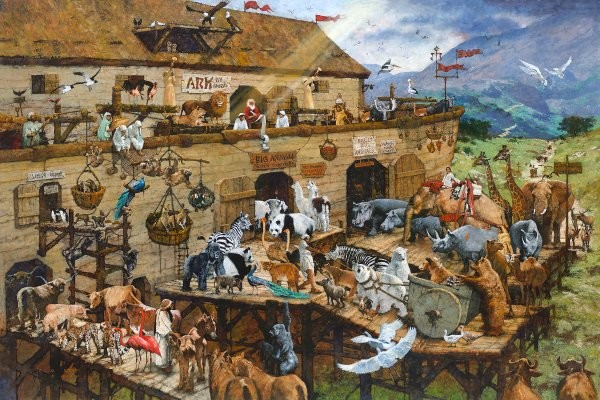 Its a Zoo in There! by Michael Dudash Print Signed & Numbered - MDU005PRSNU2030

NOTES: Michael Dudash has a terrific imagination which he utilized extensively in this humorous approach to Noah's Ark. He included numerous exotic animals and birds as well as the more familiar domestic varieties. His signs clearly identify which doors serve which animals and many couples have found their own way aboard by piggy backing on larger varieties or by hiding away in carts, baskets or whatever. The sly little foxes got the best deal as they took over a basket that could be raised to their "floor" sort of like an elevator. Viewers will marvel at the variety and number of species and at the creative path some of them took to board. Have fun finding the pairs that have gotten separated. This painting is more than a piece of art; it's entertainment!.