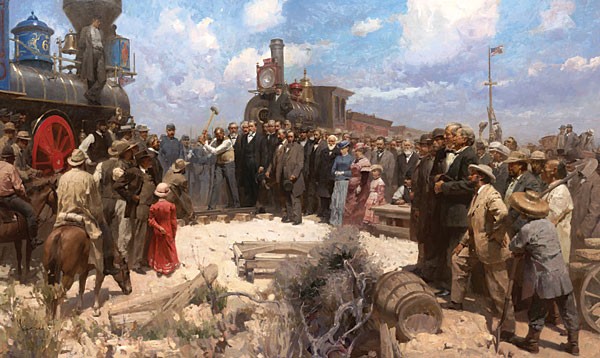 Mian Situ Golden Spike Ceremony MASTERWORK EDITION ON  Canvas is eligible for layaway in 3 equal payments of $816.67 over 60 days.

As an option you may also pay for Mian Situ Golden Spike Ceremony MASTERWORK EDITION ON - Canvas using Paypal or with your Amazon Account(*select items). Please note that all orders must be delivered to a physical address verified by Paypal or Amazon. These options are not applicable for orders to be delivered to Military or International destinations.
For Military APO/FPO orders please use our standard checkout. For International Delivery, please click on the International Shipping Icon to see the landed cost to your country. No Sales Tax Except In The State Of Florida.

NOTES: With the Union asunder and in the midst of the American Civil War, Abraham Lincoln recognized that the building of the First Transcontinental Railroad was not a side project to be put aside and left dependent upon the outcome of the war. It was a task that defined the full potential of a unified nation. It would be started despite the war and stand as the restored Union’s first great accomplishment after the war.

A nation set to burst forth on the world was foreshadowed that day. Mian Situ’s Golden Spike Ceremony places us in the middle of that historic moment on May 10, 1869 at Promontory Summit in what was known then as Utah Territory. The railroads, which represented the day’s apex of progress and technology, joined the nation.The diverse melting pot of peoples that would make the United States so great conceived, financed and literally with their hands, hewed out of the North American soil this vital commercial artery.They gathered around as Leland Stanford, president of the Central Pacific Railroad, drove the final spike that officially joined the Central Pacific and Union Pacific railroads.A single railroad tie-length apart sat the CP No. 60 “Jupiter” (blue) and the UP No. 119 (red). It is said that during the ceremony itself, the crowd was so thick that photographers could not get close enough to get a clear shot..

Golden Spike Ceremony MASTERWORK EDITION ON  Canvas by Mian Situ  is signed by the artist and comes with a certificate of authenticity.

"Born in Southern China, Mian Situ received his formal art training in his native homeland of Guangdong, formerly Canton. He graduated with a Bachelor of Fine Arts from the prestigious Guangzhou Institute of Fine Art. After instructing for six years, he earned a Masters in Fine Art. Immigrating to Canada, then later moving to the United States, Mian s paintings clearly reflect his upbringing in the rural countryside of his native China. His artistic diversification of subject matter, from the people of the small villages and farming communities going about their daily lives to the exquisite portraitures as well as his most recent works inspired by western historical themes and American landscapes, all reflect the sensitive dedication of this Master Artist. Mian has been recognized with many national art awards. During the 2002 Masters of the American West exhibition and sale at the Autry National Center in Los Angeles California, Mian Situ received the Masters of the American West Museum Purchase Award, the Thomas Moran Memorial Award for Artistic Merit and the Patron s Choice Award. In 2003, Mian was honored with the Thomas Moran Memorial Award, Artist s Choice Award and Patron s Choice Award. Most recently, in 2005, Mian was presented with the Artist s Choice Award for his painting, The Word of God. Mian Situ is represented by Trailside Galleries in Scottsdale, Arizona and Jackson, Wyoming. He lives with his wife, Helen and daughter, Lisa in Southern California. " 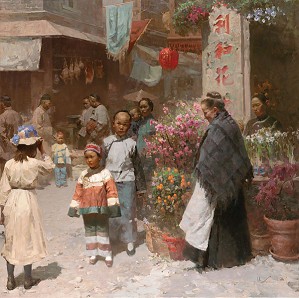 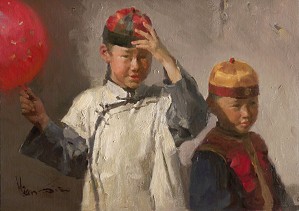 Mian Situ Dressed for the Festival SMALLWORK EDITION ON 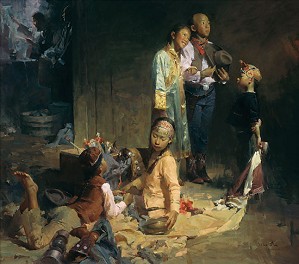 Mian Situ Everybody Loves a Cowboy 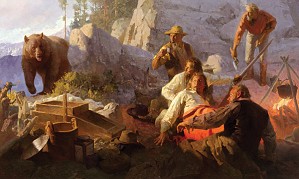 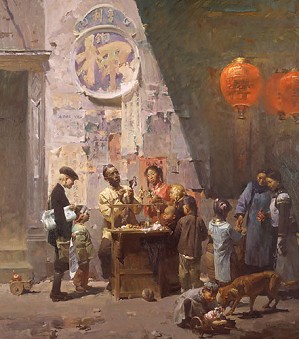 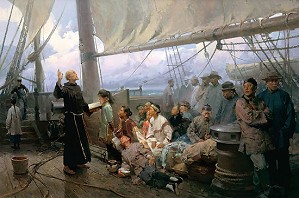