NOTES: For the first six years of my life, I lived within 100 feet of Kelly Field in southwest Texas, home to the 43rd School Squadron, Advanced Flying School Pursuit Section. The young pilots in their P-12s were a farmers nightmare, practicing their landings time and again in the middle of local farmers fields. My father, an instructor at the school, can be seen in Farmers Nightmare sitting at the controls of aircraft number 2. He waits as two of his students begin their takeoff rolls, while up above another instructor with his students prepares to cut engines..

Farmer's Nightmare Limited Edition Print   by Keith Ferris  is signed by the artist and comes with a certificate of authenticity. 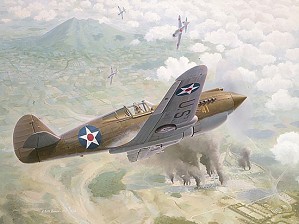