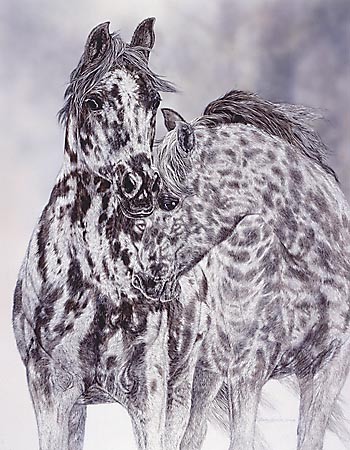 There is 1 Available of A TIME TO HEAL - Lithograph at this price.

NOTES: The old, traditional ways of wolfing had seriously reduced wolf populations, even more barbaric forms of annihilating wolves were instituted. The "loop" refers not to a device designed to ensnare adult wolves but to trap and hand up living pups while the adult pack was away from the den in the nighttime hunt. Made of wire and spring-loaded hooks, the long trap offered tempting bits of meat to the unsuspecting pups. As they were caught, the strangling youngsters struggled and cried out in pain and panic, but their mother could do nothing but lick them and try to comfort them. When the pack members returned a dawn, each was gunned down until all the adults had been killed. Only then did the wolfer step in to kill the pups as well, effectively wiping out an entire family. An ancient Indian story says that the spirits of all the slaughtered wolves of this vast land have gathered at a distant mountaintop, awaiting the time when they can safely return to roam the land they love. For much of our country this time has not come, but hope remains that what has happened over the last few years on the tribal lands of the Nez Perce can one day occur throughout our great land. The Nez Perce have long been admired for their skill in horsemanship and their ability to breed exception horses, known today as Appaloosas. These spotted horses were not only born with good "medicine" that would keep their owners safe in battle, but they were also sure-footed, strong, healthy and easy to train. In 1805, as Meriwether Lewis and William Clark passed through the Nez Perce territory, the beauty and uniqueness of the spotted horses amazed them. In an effort to destroy the spirit of the Nez Perce, the government had hit upon one of the most potent means possible: the killing of the People"s beloved horses. By 1900, fewer than three hundred Appaloosa horses remained in the United States. For the Nez Perce, the Appaloosa and the wolf, the government"s penchant for control of people and nature came close to forcing their extinction. But a few years ago, the Nez Perce ushered in a time of healing "”one which offers potential for changing our ideas and ourselves "” by welcoming to its tribal lands in Winchester, Idaho, a pack of wolves raised in captivity, formerly known as "The Sawtooth Pack." The famous pack, first introduced to the public in the documentary "Wolves at Our Door," is at home again on the land that its ancestors once shared with the native people. This time, however, the eleven "Wolves of the Nez Perce" play different roles: as ambassadors for their wild brothers and sisters. The mission of the accompanying Wolf Education and Research Center is to promote awareness of wolves and to learn through education for the purpose of co-existing with them. Visitors are provided with a rare opportunity to experience the wonder of wolves in a natural setting and to partner in this mission with the Nez Perce, a native people rich in culture, history and ecological understanding. Now, more than ever, it is a time to heal..

A TIME TO HEAL  Lithograph by Judy Larson  is signed by the artist and comes with a certificate of authenticity.

Judy Larson always knew she was going to be an artist. She was surrounded by them as a child, and was particularly inspired by her father, a professional illustrator. Judy received a Bachelor of Science degree in Commercial Art from Pacific Union College in Northern California, then spent the next 17 years as a commercial artist, illustrator and art director. In 1988, influenced by her love of nature and animals, Judy devoted her time to wildlife art. Her primary focus in each of her paintings is the animal, with the horse as a recurring subject. Her unique approach to her work is through the use of scratch board--a technique that can render magnificent detail but one requiring infinite patience. Scratch board, an old, but little used medium, consists of a smooth, thin surface of hardened China clay applied to a board. The subject is then painted solidly with black India ink to create a silhouette. Now the exacting work begins, engraving the image into the surface of the artwork. While many artists use steel nibs or engraving tools, Judy prefers to work with X-acto blades, changing them ever few minutes to produce as fine a line as possible. Once the subject has been totally scratched, it is a finished black and white illustration, ready for the artist to add color. The methods of adding color are diverse. Judy prefers a combination of airbrush, gouache or acrylics for finishing, with frequent rescratching for detail. Scratch board is a demanding medium, one that Judy has used masterfully in developing her unique approach to wildlife art. 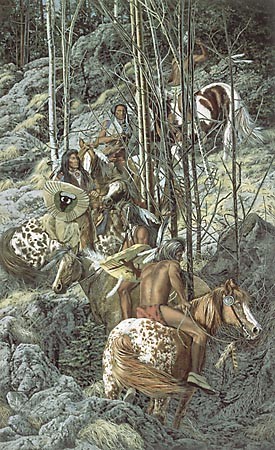 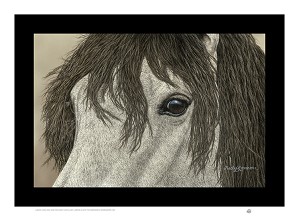 Judy Larson Long Ago and Far Away 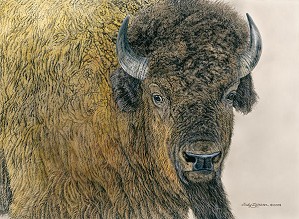 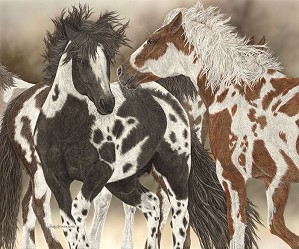 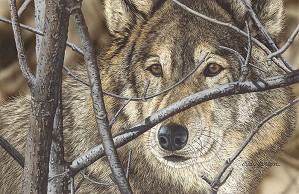 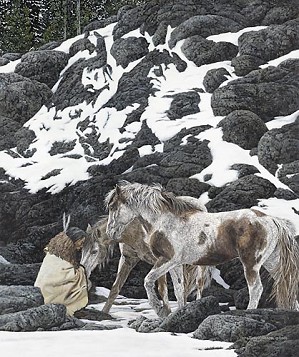 Judy Larson ONE WITH