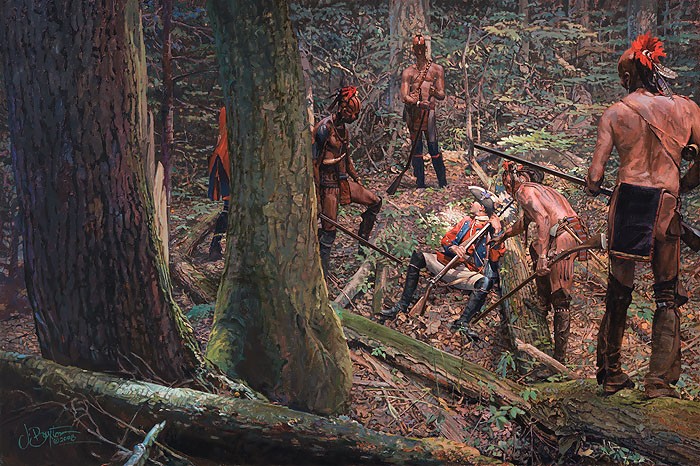 John Buxton Lost and Found for Bounty  Giclee On Canvas

John Buxton Lost and Found for Bounty  Giclee On Canvas is eligible for layaway in 3 equal payments of $131.67 over 60 days.

As an option you may also pay for John Buxton Lost and Found for Bounty - Giclee On Canvas using Paypal or with your Amazon Account(*select items). Please note that all orders must be delivered to a physical address verified by Paypal or Amazon. These options are not applicable for orders to be delivered to Military or International destinations.
For Military APO/FPO orders please use our standard checkout. For International Delivery, please click on the International Shipping Icon to see the landed cost to your country. No Sales Tax Except In The State Of Florida.

Lost and Found for Bounty - BU00042lg  Giclee On Canvas

NOTES: Lost and Found for Bounty - Despite the insurmountable odds, harsh discipline or unbearable circumstances British soldiers were occasionally driven to the desperate act of deserting into the vast colonial wilderness. There are accounts recorded from as early as the 18th Century. To help capture these run-a-ways during the French and Indian War, the use of allied Indians began in earnest after 1760. One of the most successful captures involved the return of 14 men taken by the Seneca in 1762. Some of these deserters were of the 60th Royal American Regiment "• as seen in this painting "• and were returned to their commandant at Fort Niagara on Lake Ontario. Another instance can be found in this account from in the papers of Colonel Henry Bouquet: Lieut. Carre to Col. Bouquet "• Venango "• Aug. 15 1761 "Sir, I have sent under the care of the bearer, Corporal Roller, Phillip Dill of Major Walters Company, who deserted from Niagara the 12th of July & was brought here by an Indian who took him up near Custaloga's; as the Indian insisted much to have his reward in Rum, I promised that he should have 2 1/2 gallons at Fort Pitt (where he will be in a few days) in case you approve of it. The Deserter says there was another man came off with him, whom he left in the woods near Presqu'isle so weak that he could not proceed & that he advised him to deliver himself up at Presqu'isle . . . ." "Lost and Found for Bounty" is a Fine Art Canvas that captures John Buxton"s incredible play of light in a dark forest coupled with raw, intense emotion. No one captures light and or stages a scene in a painting as skillfully as Buxton and few other painters pay such attention to historic detail..

Lost and Found for Bounty  Giclee On Canvas by John Buxton  is signed by the artist and comes with a certificate of authenticity. 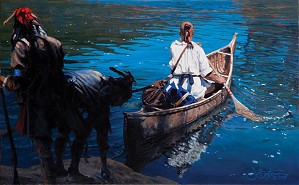 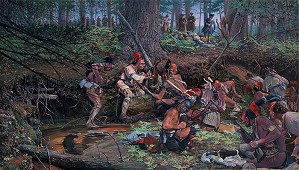 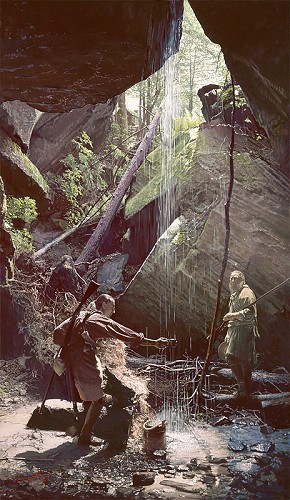 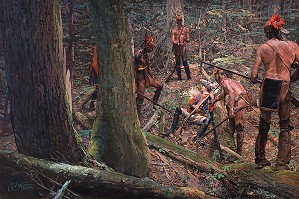 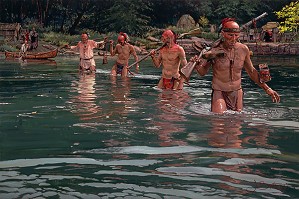 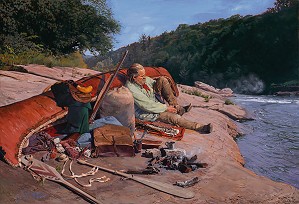