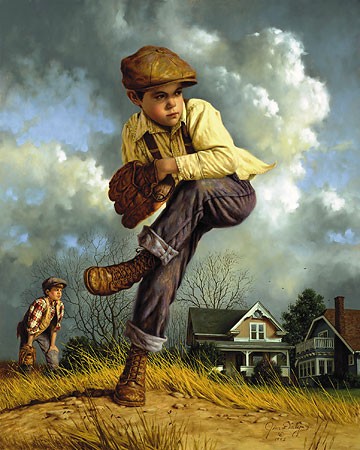 NOTES: Last of the ninth, bases loaded, two out. Your team will win the game if you get this batter out. You run the count to 3 and 2. Eyes on the target, you wind up and throw your best pitch a fast ball. He swings and misses! Jim Daly captures a moment every little boy dreams about in Fast Ball (shown right), a nostalgic scene based on his own childhood. I have fond memories of playing baseball in an old vacant lot on the outskirts of town, says Jim. Like lots of kids, the heroes of my youth were the great baseball players of the past..

Fast Ball W/gift Print Rain Rain Go Away L.e. Print   by Jim Daly  is signed by the artist and comes with a certificate of authenticity.

Soft-spoken and modest, Jim Daly would seem a reluctant celebrity. Still, his tender and nostalgic portrayals of children have earned him a wide and ardent following among collectors. Born in Oklahoma and raised throughout the West, Jim developed an early appreciation for the art of Norman Rockwell and at a young age knew he wanted to be a painter himself. He can recall—and his parents still own—a painting he did at age 13 of an old-fashioned barbershop. "Even back then," he says, "I had an interest in the past ... and I still prefer the warm palette I used then." After a stint in the army in the mid-1960s, Jim studied nights at the Los Angeles Art Center College of Design while working days at an aerospace company. Within just a few years, he was able to devote himself entirely to his art. His wife, Carole, and their four now-grown sons frequently modeled for him. Jim s paintings are represented in many private and corporate collections and have earned a wealth of awards, including the Favell Museum s Western Heritage Award for excellence in portraying realistically and accurately early Americana. Articles about Jim s work have appeared in Southwest Art, American Artist and Art West magazines among others and in a recent U.S. Art magazine poll, gallery owners named him one of their top 20 most popular artists. Jim has also had the pleasure of illustrating three well- received children s books. He and Carole currently make their home in western Oregon. 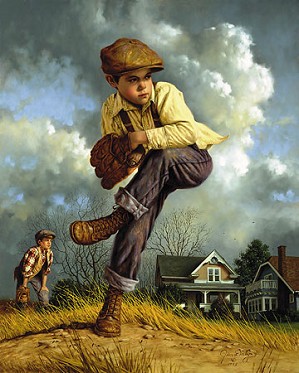 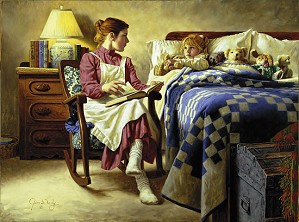