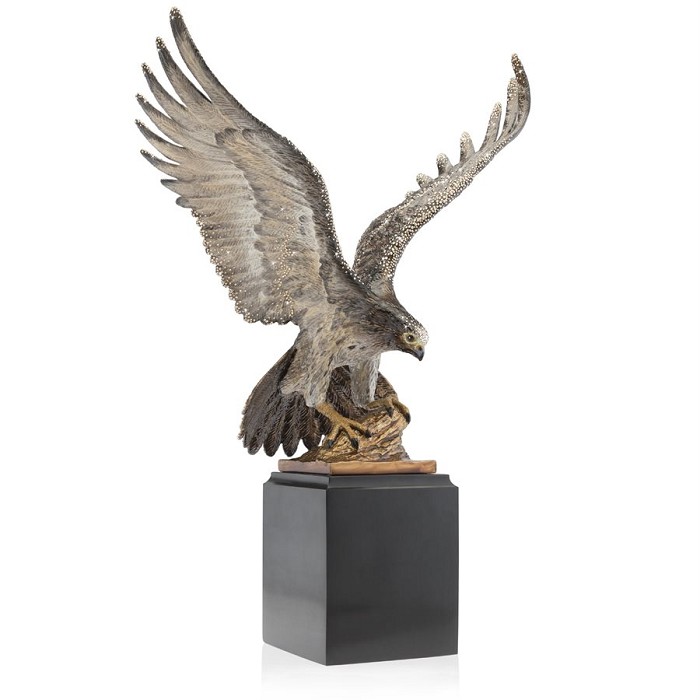 NOTES: Baldwin Falcon Figurine. Our Falcon soars above in outstretched jeweled wings over a carved black marble plinth. Baldwin is carved first in clay to capture his striking silhouette then molded in metal at our India foundry. This stunning Falcon Figurine is hand-painted with enamels to capture the beauty of his feathers and hand-set with over 3000 Swarovski crystals to further define and highlight his patterns. Our finest artisans at the Jay Strongwater Rhode Island workshop bring all the elements together to make each Baldwin Falcon Figurine. Limited to an edition of 100. Materials: Falcon metal figurine sand-casted in India. Imported hand-carved black marble plinth. Hand-enameled and hand-set with Swarovski crystals at the Jay Strongwater Rhode Island workshop. Packaging: Signature Jay Strongwater box..

"In essence, I've created my own niche, the jeweler turning his meticulous eye and art on a world beyond a woman's wrist, neck, and ears. I'm fascinated by the idea of taking the everyday objects around us and turning them into jewels for the home. Today, that can mean anything from miniature enamel boxes, tulip candlesticks, floral mirrors, tables with legs of curling ivy, and delicate bird-on-a-branch lamps, all seemingly purloined from some enchanted forest where Swarovski crystals fall like snowflakes." - Jay At the heart of the Jay Strongwater brand is the designer himself. Jay's beginnings as a high fashion jewelry designer are apparent in the details of each piece he creates. Jay Feinberg was born in Woodmere, NY-a suburb of New York City in 1960. Even as a youngster Jay exhibited artistic talent. He was encouraged by his parents and teachers to pursue his love of arts and crafts by learning weaving, macramé, painting and metalsmithing. His design training was further cultivated at the prestigious Rhode Island School of Design in Providence, Rhode Island. Jay's illustrious design career has involved a string of serendipitous occurrences - beginning with a homemade strand of beads that he designed and hand-strung for his mother. Those meticulously designed beads became the launching pad for a career that spanned from window campaigns in fashion's most prestigious storefronts, to haute couture runways, to coverage in the world's most notable fashion magazines. Jay's first picture frame design is also surrounded by his signature penchant for serendipity. The story has become a legendary one. In fall of 1994, while working in his New York City studio concepting an idea as a gift for one of his fashion buyers, Jay laid out one of his crystal earring designs. He did so in four corners creating a rectangle. He then constructed the framework connecting the four corners together. The result: the Patricia Frame named for his mother - an exquisitely Swarovski® crystal-glistened frame that held a photograph. Not only did the buyer appreciate the gift, she wanted to know where she could get more of those frames! Those were the brilliant beginnings of what have become some of the most sought after decorative designs on the market. In the years since that first frame, Jay's Home Collection has flourished. In 2004, Jay Strongwater Home Couture, a premier home furnishings collection launched. In addition, a line of Jay Strongwater custom pieces - including grand-scale installations have been produced for clients and collectors all over the world. The Jay Strongwater brand with Creative Director Jay at the helm has expanded globally. Jay Strongwater boutiques can be found in throughout the US, at Harrods in London, and several other international locations. Jay and his work have been recognized and celebrated by collectors, celebrities, and dignitaries alike. His first Beauty Collection, designed to commemorate vintage Hollywood, was chosen to fill the coveted gift bags at the Academy Awards. He was honored as a distinguished designer at London's Chelsea Flower Show's 200th Anniversary. He has also been a special guest at Harrods' "Fantasy Garden" event. Jay has also utilized his design expertise to garner support for worthy charitable organizations. "I've been very honored that Hollywood has enjoyed my creations all these years, whether it was back in the jewelry days when Candice Bergen would wear our pins on Murphy Brown… Sir Elton John has many Jay Strongwater styles, including the opulent piano music box, which plays Candle in the Wind just for him. And Oprah, she's always been a fan. She even gave one of my frames to David Letterman on-air. And recently I've had the honor of working with Elizabeth Hurley to help support and raise funds for Breast Cancer Research Foundation." - Jay 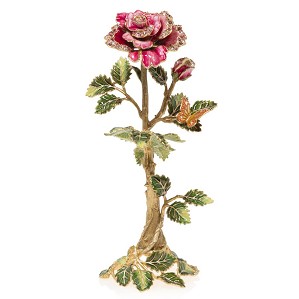 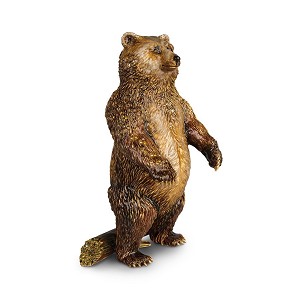 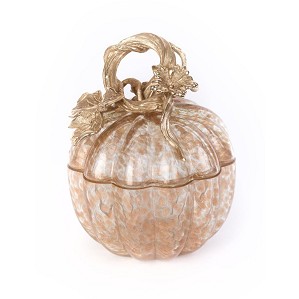 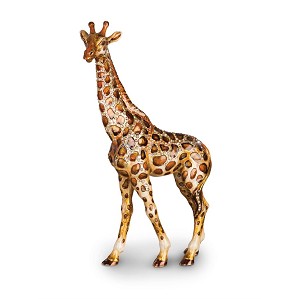 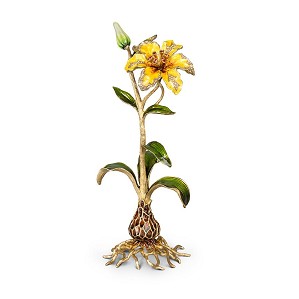 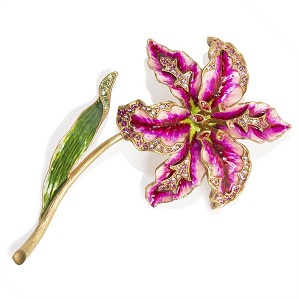