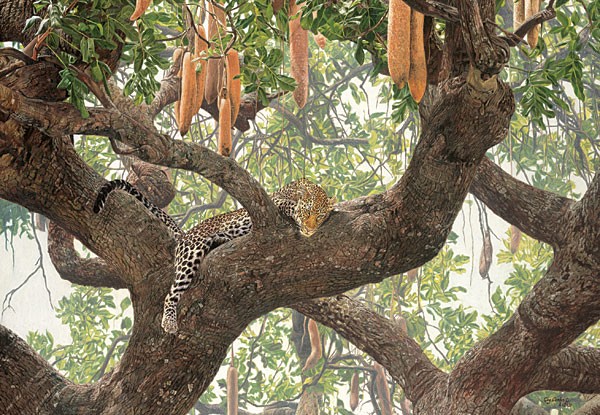 Guy Combes Leopard Lounge  Canvas is eligible for layaway in 3 equal payments of $231.67 over 60 days.

As an option you may also pay for Guy Combes Leopard Lounge - Canvas using Paypal or with your Amazon Account(*select items). Please note that all orders must be delivered to a physical address verified by Paypal or Amazon. These options are not applicable for orders to be delivered to Military or International destinations.
For Military APO/FPO orders please use our standard checkout. For International Delivery, please click on the International Shipping Icon to see the landed cost to your country. No Sales Tax Except In The State Of Florida.

NOTES: “Find a sausage tree,” says Guy Combes, “and the cances are good you’ll find a leopard as well. They are ideal for leopards, with their large broad branches to sprawl out on or to place a kill for safekeeping away from lions, hyenas and jackals. Leopards have evolved incredibly strong fore and hind leg muscles specifically for climbing trees. This trait allows them to avoid fighting with other animals of prey over a kill.

“Sausage trees don’t grow in stands, so a large solitary tree provides a leopard not only with solitude but also with an expansive view of what is happening in the territory around it. Leopards will hunt from the early evening to dawn so at midday, as it was when I came across this great cat on the Maasai Mara, leopards are most likely resting. This cat was so comfortable in its perch that a group of elephants rubbing themselves on the base of the tree barely disturbed it.”

To view Leopard Lounge in process go to: www.guycombes.com and click “On The Easel.”.

Leopard Lounge  Canvas by Guy Combes  is signed by the artist and comes with a certificate of authenticity. 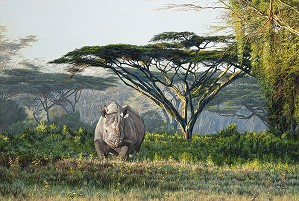 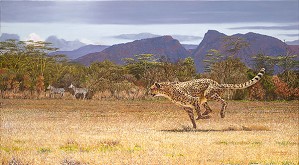 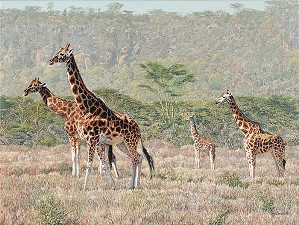