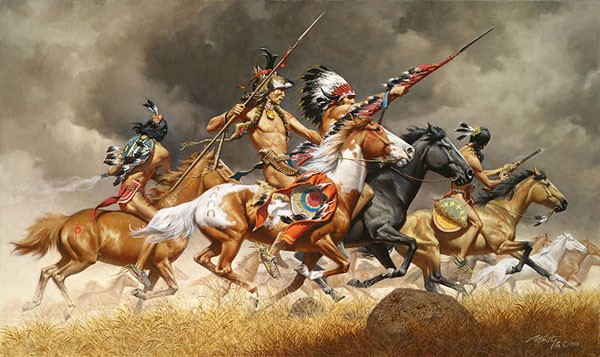 Frank McCarthy Thunder Across the Plains  Canvas is eligible for layaway in 3 equal payments of $198.33 over 60 days.

As an option you may also pay for Frank McCarthy Thunder Across the Plains - Canvas using Paypal or with your Amazon Account(*select items). Please note that all orders must be delivered to a physical address verified by Paypal or Amazon. These options are not applicable for orders to be delivered to Military or International destinations.
For Military APO/FPO orders please use our standard checkout. For International Delivery, please click on the International Shipping Icon to see the landed cost to your country. No Sales Tax Except In The State Of Florida.

NOTES: Frank McCarthy remains the unrivaled “Dean of Western Action Painters.” No other artist has come close to capturing the dynamic power and drama of the Old West. Thunder Across the Plains contains all the hallmarks of a McCarthy classic: a frozen instant of charging warriors, rampaging horses and threatening skies. The mystical bond between the Plains Indian and his steed is conveyed as if it is the ultimate display of skill and courage.
On the endless prairie, horses were the most valued possessions. In battle, or on the hunt, a strong and fast horse was often the difference between life and death. These braves stampede a plundered herd across the grasslands toward their distant village where an evening of celebration will be filled with dance and stories of cunning and daring.
.

Thunder Across the Plains  Canvas by Frank McCarthy  is signed by the artist and comes with a certificate of authenticity.