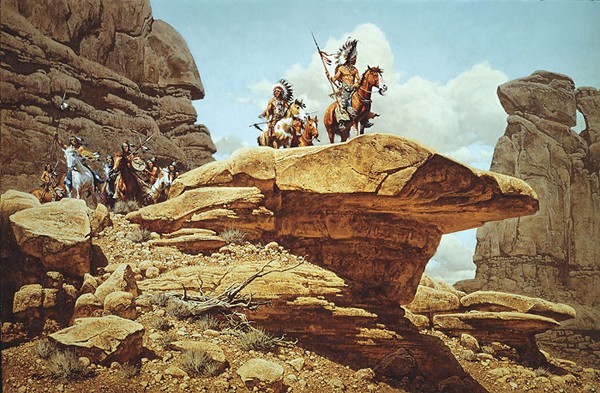 Frank McCarthy The Hostiles ANNIVERSARY EDITION ON  Canvas is eligible for layaway in 3 equal payments of $231.67 over 60 days.

As an option you may also pay for Frank McCarthy The Hostiles ANNIVERSARY EDITION ON - Canvas using Paypal or with your Amazon Account(*select items). Please note that all orders must be delivered to a physical address verified by Paypal or Amazon. These options are not applicable for orders to be delivered to Military or International destinations.
For Military APO/FPO orders please use our standard checkout. For International Delivery, please click on the International Shipping Icon to see the landed cost to your country. No Sales Tax Except In The State Of Florida.

NOTES: The mid-1800s brought a great surge westward which aroused and antagonized the Native American tribes whose land was being violated and whose staff of life, the buffalo, was being exterminated. The Indians relentlessly attacked the endless wagon trains, the crews laying the railroad tracks, the pony express riders, the men stringing telegraph wires and the lone prospector seeking hidden mineral wealth on the Indian's sacred grounds. Warring bands waiting silently on high ridges and outcroppings would receive smoke signals from their scouts, whereupon they would descend in full fury upon the unsuspecting trespassers.

The Hostiles is a McCarthy classic, in subject and composition. The rugged land is as much a central character as the Indians who aggressively defend it. The prominent, rocky ledge emphasizes the powerful position of this band, and the point man in particular. Available now as a Fine Art Giclée Canvas, The Hostiles embodies the spirit of defiance in the face of all challengers both visible and anticipated.

The Hostiles ANNIVERSARY EDITION ON  Canvas by Frank McCarthy  is signed by the artist and comes with a certificate of authenticity.