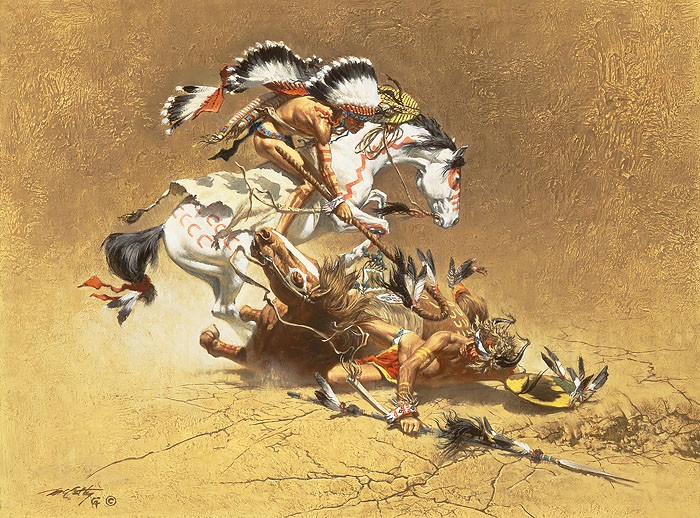 Frank McCarthy The Coup ANNIVERSARY EDITION ON  Canvas is eligible for layaway in 3 equal payments of $148.33 over 60 days.

As an option you may also pay for Frank McCarthy The Coup ANNIVERSARY EDITION ON - Canvas using Paypal or with your Amazon Account(*select items). Please note that all orders must be delivered to a physical address verified by Paypal or Amazon. These options are not applicable for orders to be delivered to Military or International destinations.
For Military APO/FPO orders please use our standard checkout. For International Delivery, please click on the International Shipping Icon to see the landed cost to your country. No Sales Tax Except In The State Of Florida.

NOTES: Coup, the act of touching and not killing an opponent in battle, was regarded as the highest act of bravery and skill in the face of the enemy. It brought prestige and honor to the Plains warrior that accomplished it. And no artist comes close to counting coup on Frank McCarthy when it comes to capturing the dynamic power and drama of the Old West.

This Anniversary Edition release of The Coup gives collectors the opportunity to own one the “Dean of Western Action Painters” most popular works. The victorious Indian in war bonnet is about to touch a fallen enemy with his coup stick. Feathers in the war bonnet, stripes across the horse’s nose or the feathers in its tail may represent past coups. The lightning streak from shoulder to neck is to give the horse speed and energy in battle. The hoof marks painted across the hips denote horse raids.

McCarthy's paintings have gained legions of admirers among art lovers and critics alike. Whether his subjects are Native Americans, mountain men, cavalry or cowboys, McCarthy's work, its intensity and vision of the American West has endured.
.


The Coup ANNIVERSARY EDITION ON  Canvas by Frank McCarthy  is signed by the artist and comes with a certificate of authenticity.