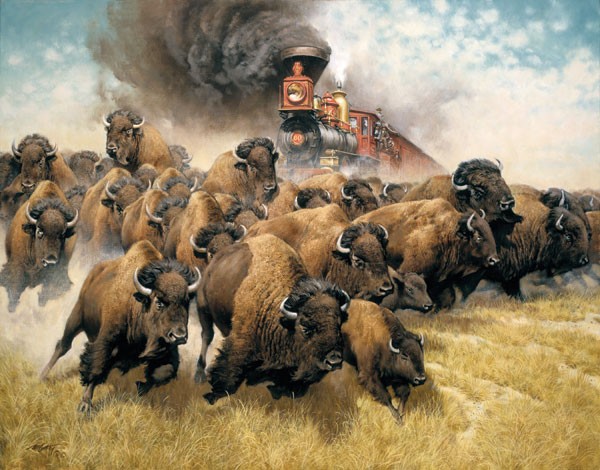 Frank McCarthy The Coming of the Iron Horse ANNIVERSARY EDITION   is eligible for layaway in 3 equal payments of $265.00 over 60 days.

As an option you may also pay for Frank McCarthy The Coming of the Iron Horse ANNIVERSARY EDITION using Paypal or with your Amazon Account(*select items). Please note that all orders must be delivered to a physical address verified by Paypal or Amazon. These options are not applicable for orders to be delivered to Military or International destinations.
For Military APO/FPO orders please use our standard checkout. For International Delivery, please click on the International Shipping Icon to see the landed cost to your country. No Sales Tax Except In The State Of Florida.

The Coming of the Iron Horse
ANNIVERSARY EDITION - FM00152

NOTES: Of all the innovations of the nineteenth century, none changed the landscape of the American West more than the steam locomotive. A monument to speed, industry and westward expansion, the locomotive charged across the landscape, changing the face of frontier life forever, but it did not happen overnight.

Past and present collided in the prairies and plains, as workers laying tracks for the trains met with resistance from local wildlife. Even the mighty locomotive engine itself, with all its power and might, occasionally ran into the unstoppable force of nature.

“Huge migrating herds of buffalo could stall a train for hours,” said Frank McCarthy. “For sport, travelers sometimes took potshots at them from the cars while they waited for the procession to pass.” It would not be long before progress and professional hide hunters rendered the threat of buffalo on train tracks nearly extinct..

The Coming of the Iron Horse ANNIVERSARY EDITION   by Frank McCarthy  is signed by the artist and comes with a certificate of authenticity.