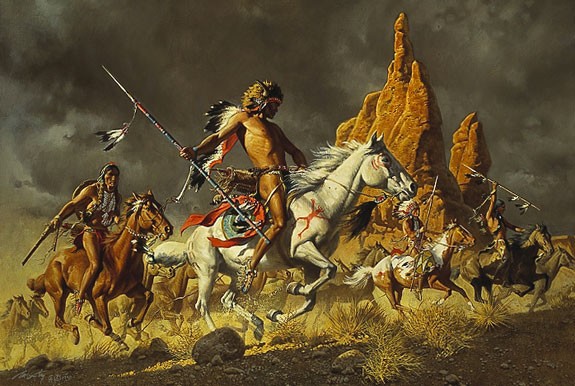 Frank McCarthy NAVAJO PONIES FOR COMANCHE WARRIORS  Lithograph is eligible for 3 equal layaway payments in store, with a credit card of $75.00 over 60 days.

As an option you may also pay for Frank McCarthy NAVAJO PONIES FOR COMANCHE WARRIORS - Lithograph using Paypal or with your Amazon Account(*select items). Please note that all orders must be delivered to a physical address verified by Paypal or Amazon. These options are not applicable for orders to be delivered to Military or International destinations.
For Military APO/FPO orders please use our standard checkout. For International Delivery, please click on the International Shipping Icon to see the landed cost to your country. No Sales Tax Except In The State Of Florida.

NOTES: The Comanche raided everywhere. They preyed upon the Navajo, who were in New Mexico and Arizona, but the Comanche didn't limit their raids to them. They hit the Apache; they hit everybody. They stole all the horses they could lay their hands on. The horse in the foreground bears on his flank an image symbolizing that a man was ridden down in battle by the owner of this horse. Different tribes had different ways of expressing it, but that was the general way of showing it. This horse's rider wears a buffalo-horned, full-feathered headdress. The Indians decorated their headdresses with all kinds of things, sometimes even an entire bird, but horns were fairly prevalent..

NAVAJO PONIES FOR COMANCHE WARRIORS  Lithograph by Frank McCarthy  is signed by the artist and comes with a certificate of authenticity.