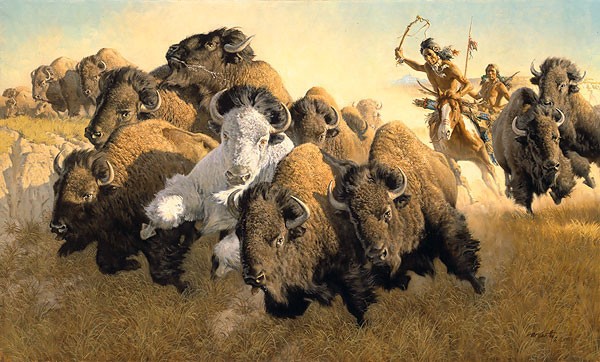 Frank McCarthy In Pursuit of the White Buffalo ANNIVERSARY EDITION   is eligible for layaway in 3 equal payments of $265.00 over 60 days.

As an option you may also pay for Frank McCarthy In Pursuit of the White Buffalo ANNIVERSARY EDITION using Paypal or with your Amazon Account(*select items). Please note that all orders must be delivered to a physical address verified by Paypal or Amazon. These options are not applicable for orders to be delivered to Military or International destinations.
For Military APO/FPO orders please use our standard checkout. For International Delivery, please click on the International Shipping Icon to see the landed cost to your country. No Sales Tax Except In The State Of Florida.

In Pursuit of the White Buffalo
ANNIVERSARY EDITION - FM00155

NOTES: Sioux hunters pursue a rare white buffalo, its robe considered “big medicine” to be passed reverently from generation to generation and could command the price of 10 to 15 horses. Estimates based on hide trader’s records indicate that a white bison occurred only once in every five million animals. Plains Indians trained their best horses to hunt buffalo. But the white buffalo was elusive, often seeming to be sheltered by the rest of the herd as if the others had an instinctive sense that its color made it somehow special. These Sioux hunters may be close but the outcome is far from certain..

In Pursuit of the White Buffalo ANNIVERSARY EDITION   by Frank McCarthy  is signed by the artist and comes with a certificate of authenticity.