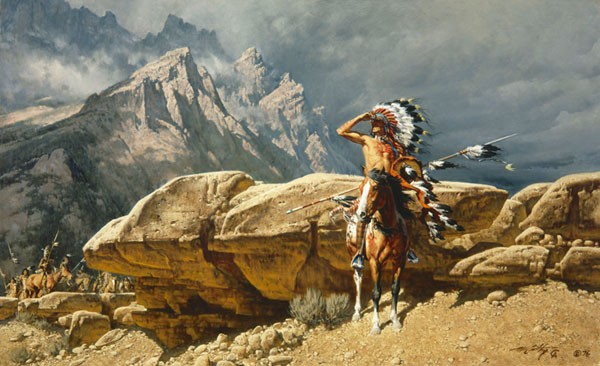 Frank McCarthy From the Rim ANNIVERSARY EDITION ON  Canvas

Frank McCarthy From the Rim ANNIVERSARY EDITION ON  Canvas is eligible for layaway in 3 equal payments of $198.33 over 60 days.

As an option you may also pay for Frank McCarthy From the Rim ANNIVERSARY EDITION ON - Canvas using Paypal or with your Amazon Account(*select items). Please note that all orders must be delivered to a physical address verified by Paypal or Amazon. These options are not applicable for orders to be delivered to Military or International destinations.
For Military APO/FPO orders please use our standard checkout. For International Delivery, please click on the International Shipping Icon to see the landed cost to your country. No Sales Tax Except In The State Of Florida.

NOTES: Frank McCarthy’s From the Rim is set against a giant shelf of rimrock and under threatening skies. A Sioux warrior rides out beyond his waiting and impatient war party. Shading his eyes and scanning the horizon, he is looking perhaps for a mirror flash or a scout’s signal with blanket or robe to indicate in which direction the warriors should ride. It was the habit of the Sioux, when no enemy came to them within a respectable interval, to ride forth and seek out a worthy adversary. The Sioux often chose the Pawnee on whom to bestow these periodic blessings, giving their young men a chance to satisfy their need to display their valor in battle.

McCarthy’s work was always imbued with a high sense of drama. Each painting nearly leaps off the canvas. He builds this sense of tension in every painting, even when the horses and figures are still. From the Rim is a perfect example of this McCarthy trademark style. Here, the action is provided in the dramatic and foreboding design of the landscape surrounding this seemingly motionless Sioux scout.

At 33w x 20h, this Anniversary Fine Art Edition Giclée canvas carries all the impact of McCarthy’s original work of art. McCarthy considered this piece one of his favorite paintings because of the intensity and variation of the landscape with which he built the central figure.
.


From the Rim ANNIVERSARY EDITION ON  Canvas by Frank McCarthy  is signed by the artist and comes with a certificate of authenticity.