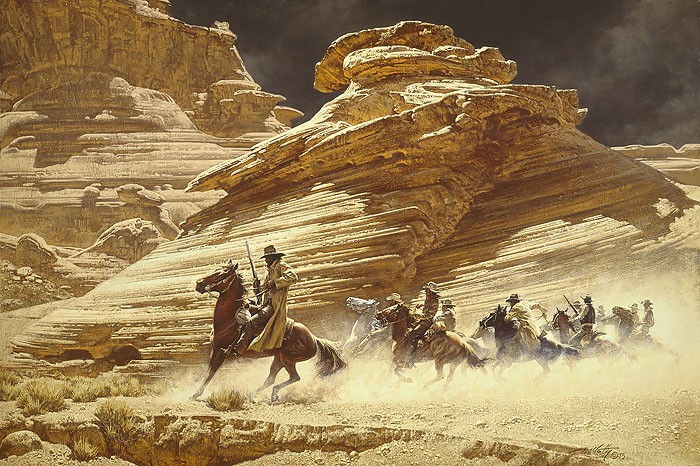 Frank McCarthy Dust Stained Posse ANNIVERSARY EDITION ON  Canvas is eligible for layaway in 3 equal payments of $165.00 over 60 days.

As an option you may also pay for Frank McCarthy Dust Stained Posse ANNIVERSARY EDITION ON - Canvas using Paypal or with your Amazon Account(*select items). Please note that all orders must be delivered to a physical address verified by Paypal or Amazon. These options are not applicable for orders to be delivered to Military or International destinations.
For Military APO/FPO orders please use our standard checkout. For International Delivery, please click on the International Shipping Icon to see the landed cost to your country. No Sales Tax Except In The State Of Florida.

NOTES: Throughout the West a tough breed of outlaws was challenged by an equally tough breed of lawmen. The Outlaw Trail extended north of Fort Benton, Montana, into Canada and south through El Paso into Mexico. It was the highway for stolen steer and horse herds.

Here a posse reins up for a wary study of the strange terrain ahead. They are not far from Robbers' Roost, the maze of canyons Butch Cassidy and the wild bunch called their hide-out. It appears a likely place for a canyon ambush. The ominous clouds indicate the posse could be in for double trouble¯both from the outlaws and the threat of flash flood.

Collectors today are rediscovering that there is no other painter of the Old West like the Dean of Action Painting himself, Frank McCarthy. Dust Stained Posse seethes with a high sense of drama that nearly leaps off the canvas and this Anniversary Edition Canvas is the perfect example of McCarthy's trademark style: action, action and more action with a touch of foreboding thrown in for good measure.
.


Dust Stained Posse ANNIVERSARY EDITION ON  Canvas by Frank McCarthy  is signed by the artist and comes with a certificate of authenticity.