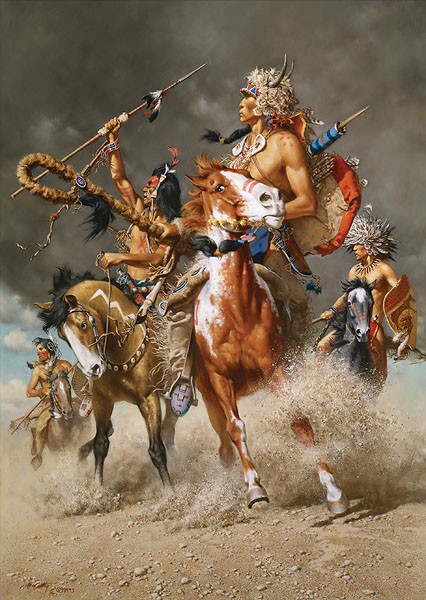 Frank McCarthy Change in the Wind  Canvas is eligible for layaway in 3 equal payments of $198.33 over 60 days.

As an option you may also pay for Frank McCarthy Change in the Wind - Canvas using Paypal or with your Amazon Account(*select items). Please note that all orders must be delivered to a physical address verified by Paypal or Amazon. These options are not applicable for orders to be delivered to Military or International destinations.
For Military APO/FPO orders please use our standard checkout. For International Delivery, please click on the International Shipping Icon to see the landed cost to your country. No Sales Tax Except In The State Of Florida.

NOTES: The Crows called themselves Absaroke, loosely translated as “the Raven People.” They dominated rich hunting areas but at the cost of routinely defending their territory from neighboring tribes. North of the Crow were the Blackfoot; the Sioux and Cheyenne were to the east. Bright colors demonstrate a sense of pageantry in this Crow war party. The red square on his horse’s right shoulder identifies the leader whose buffalo headdress is adorned with beadwork. This determined group of warriors has left blue sky behind and but are suddenly called to a halt. What, or more likely who, has captured their attention?

This never-before-published McCarthy painting, presented in a Giclée canvas edition, has the look and feel of the artist’s original work of art.
.

Change in the Wind  Canvas by Frank McCarthy  is signed by the artist and comes with a certificate of authenticity.