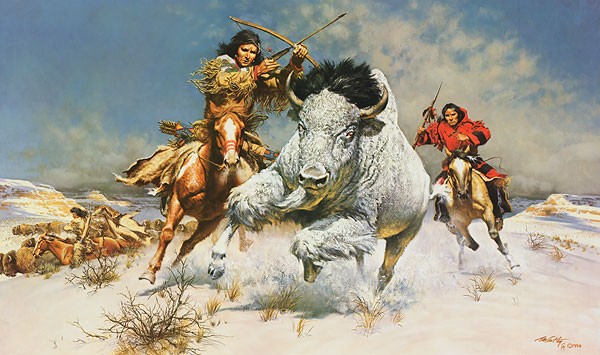 As an option you may also pay for Frank McCarthy Big Medicine MASTERWORK ANNIVERSARY EDITION using Paypal or with your Amazon Account(*select items). Please note that all orders must be delivered to a physical address verified by Paypal or Amazon. These options are not applicable for orders to be delivered to Military or International destinations.
For Military APO/FPO orders please use our standard checkout. For International Delivery, please click on the International Shipping Icon to see the landed cost to your country. No Sales Tax Except In The State Of Florida.

NOTES: “Plains Indian legend holds that the white buffalo was such a rarity that even the Great Spirit was in awe of it,” explained acclaimed artist Frank McCarthy. “The beast was valued by all the tribes, especially the Mandans for whom a good skin could command the price of ten to fifteen horses. Displayed in a place of special importance, the hide was considered Big Medicine. I modeled the white buffalo after a photo I took of the last known albino. The chances of a white bison appearing in a herd are one in five million, so I feel lucky to have seen one under any circumstances û almost as lucky as the two Sioux hunters in Big Medicine must have felt.”
.

Big Medicine MASTERWORK ANNIVERSARY EDITION   by Frank McCarthy  is signed by the artist and comes with a certificate of authenticity.