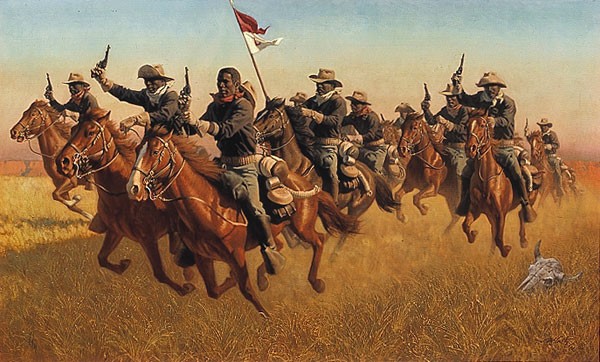 Frank McCarthy BUFFALO SOLDIERS  Lithograph is eligible for layaway in 3 equal payments of $75.00 over 60 days.

As an option you may also pay for Frank McCarthy BUFFALO SOLDIERS - Lithograph using Paypal or with your Amazon Account(*select items). Please note that all orders must be delivered to a physical address verified by Paypal or Amazon. These options are not applicable for orders to be delivered to Military or International destinations.
For Military APO/FPO orders please use our standard checkout. For International Delivery, please click on the International Shipping Icon to see the landed cost to your country. No Sales Tax Except In The State Of Florida.

NOTES: The exploits and achievements of the Buffalo Soldiers are a constant inspiration. They are as every American hero - dedicated, determined and professional - as they expertly enter a battle which may cost them their lives. General Colin Powell stated it well at the dedication of the Buffalo Soldiers Monument at Fort Leavenworth, Kansas in 1992: "The men of the Ninth and Tenth Cavalry suffered the deprecations of service on the American frontier, escorting settlers, cattle herds and railroad crews, as well as protecting mail runs. I will never forget their service and sacrifice.".

BUFFALO SOLDIERS  Lithograph by Frank McCarthy  is signed by the artist and comes with a certificate of authenticity.