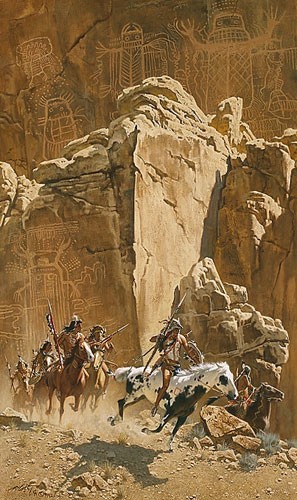 Frank McCarthy BENEATH THE CLIFF OF THE SPIRITS  Lithograph

Frank McCarthy BENEATH THE CLIFF OF THE SPIRITS  Lithograph is eligible for layaway in 3 equal payments of $98.33 over 60 days.

As an option you may also pay for Frank McCarthy BENEATH THE CLIFF OF THE SPIRITS - Lithograph using Paypal or with your Amazon Account(*select items). Please note that all orders must be delivered to a physical address verified by Paypal or Amazon. These options are not applicable for orders to be delivered to Military or International destinations.
For Military APO/FPO orders please use our standard checkout. For International Delivery, please click on the International Shipping Icon to see the landed cost to your country. No Sales Tax Except In The State Of Florida.

BENEATH THE CLIFF OF THE SPIRITS - FM00123  Lithograph

NOTES: These are Shoshone Indians in a mountain drainage running out of the Wind Rivers at their highest point. Some petroglyphs looked like birds or insects in addition to those in the more usual hominid form. They are considerably different from the ones portrayed in "By the Ancient Trails They Passed," although that took place only thirty miles away from this location. The Shoshone have no idea who created these; the petroglyphs were there before the Shoshone began to record their history. One of their elders was quoted as saying that they find new ones every spring when the snow melts. They think that the spirits carve their own images in the rocks..

BENEATH THE CLIFF OF THE SPIRITS  Lithograph by Frank McCarthy  is signed by the artist and comes with a certificate of authenticity.