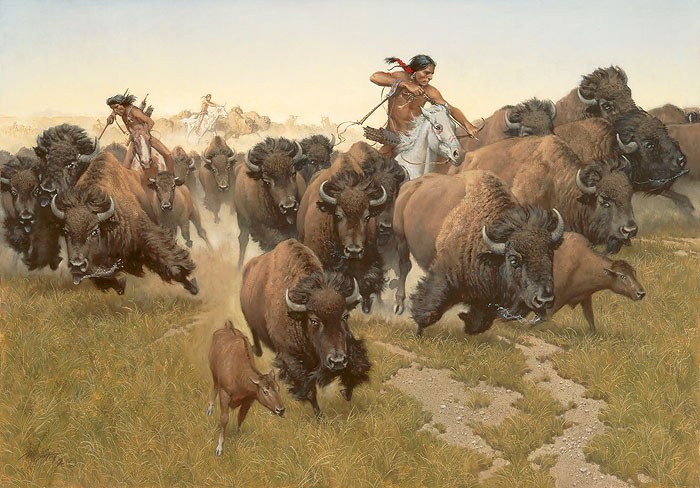 Frank McCarthy Amidst the Thundering Herd  Canvas is eligible for 3 equal layaway payments in store, with a credit card of $198.33 over 60 days.

As an option you may also pay for Frank McCarthy Amidst the Thundering Herd - Canvas using Paypal or with your Amazon Account(*select items). Please note that all orders must be delivered to a physical address verified by Paypal or Amazon. These options are not applicable for orders to be delivered to Military or International destinations.
For Military APO/FPO orders please use our standard checkout. For International Delivery, please click on the International Shipping Icon to see the landed cost to your country. No Sales Tax Except In The State Of Florida.

NOTES: No other artist comes close to capturing the dynamic power and drama of life on the plains. Frank McCarthy’s Amidst the Thundering Herd contains all the hallmarks of a McCarthy classic: a frozen instant of charging warriors and rampaging bison under a western sky. The mystical bond between the Plains Indian and his steed is conveyed as the ultimate display of skill and courage.

Most seasoned hunters prized special horses they had trained to move in close so the arrow or lance could be driven accurately. Such mounts learned to respond to the pressure of a knee or a shift in the rider’s weight, signaling it to narrow the distance or to dodge away to avoid the angry thrust of a horn. A strong and fast horse was often the difference between life and death and as Amidst the Thundering Herd shows, Frank McCarthy remains the unrivaled “Dean of Western Action Painters.”
.

Amidst the Thundering Herd  Canvas by Frank McCarthy  is signed by the artist and comes with a certificate of authenticity.