Charles Wysocki Another Year at Sea ANNIVERSARY EDITION  Giclee On Canvas is eligible for 3 equal layaway payments in store, with a credit card of $131.67 over 60 days.

As an option you may also pay for Charles Wysocki Another Year at Sea ANNIVERSARY EDITION - Giclee On Canvas using Paypal or with your Amazon Account(*select items). Please note that all orders must be delivered to a physical address verified by Paypal or Amazon. These options are not applicable for orders to be delivered to Military or International destinations.
For Military APO/FPO orders please use our standard checkout. For International Delivery, please click on the International Shipping Icon to see the landed cost to your country. No Sales Tax Except In The State Of Florida.

Another Year at Sea ANNIVERSARY EDITION - AYAS  Giclee On Canvas

NOTES: Charles Wysocki was a masterful storyteller and everything he has put into this painting contributes to the heartfelt story of separation from family and home. The work draws us upward, our eyes ascend the staircase, lingering on the flowers which she has just picked in the garden, up to the opened envelope on the stairs and finally the letter held loosely in her hand. The sad news has come that her beloved captain has been detained "Another Year at Sea." We know in our hearts that she will not soon see white sails on the dark and boundless horizon outside her window. "Another Year at Sea" marked one of Wysocki’s own ports of call on his artistic voyage. Broadening his technique and vision, he increasingly used perspective, realism and intensity of color to evoke an unforgettable mood. The theme is timeless as loved ones forever travel, and others are left behind, whether through work, war or adventure. .

Another Year at Sea ANNIVERSARY EDITION  Giclee On Canvas by Charles Wysocki  is signed by the artist and comes with a certificate of authenticity. 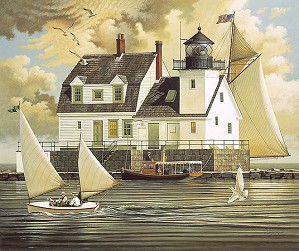 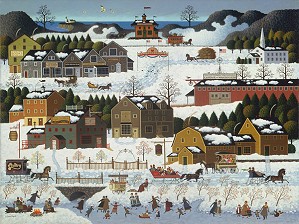 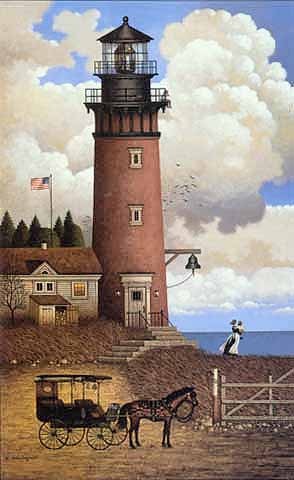 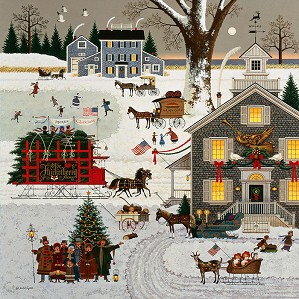