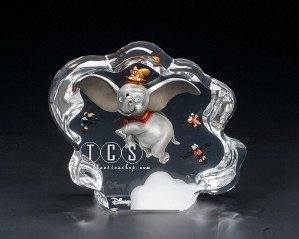 Bruce Lau is one of the talented sculptors who gives shape and form to magical moments from classic Disney Animation for the award-winning Walt Disney Classics Collection. Growing up in Pearl City, Oahu, Hawaii, Lau became very interested in Disney animated films, and hoped to be an animator. During high school, he swithced his focus to sculpting. While earning his B>A at the university of Hawaii, lau continued his interest in art, working in the art department of a local TV station. After graduating, Lau attended the renowned California Institute of the Arts, then began his proffessional career developing animation and live-action props for the entertainment industry, primarily television. His career then shifted to designing models for films, television and theme park attractions. In 1990, Lau received a request from Walt Disney Art Classics to create prototype sculptures that would capture the charm and personality of classic animated characters and favorite film scenes for the popular Walt Disney Classics Collection. Among the many porcelain sculptures he has created for the award-winning Walt Disney Classics Collection, his favorites include Scrooge McDuck: Pool of Riches, celebrating the Scrooge McDuck comics of Carl Barks; and Donald, panchito and Jose from Walt Disney's Classic animated feature, The Three Caballeros(1945). More recently, Lau sculpted the featured Walt Disney Classics Collection scene from Walt Disney's Snow White and the Seven Dwarfs(1937) showcasing the delightful Dwarfs hard at work in the jewel mine. Lau also gave shape to the whimsical White Rabbit sculpture from Walt Disney's Alice in Wonderland(1951). Based on the popular characters from Roy Story 2, the Walt Disney Classics Collection has recently added Woody and Prospector Pete to a grouping that includes Jessie, Bullseye and the Record Player Base, all sculpted by Lau.