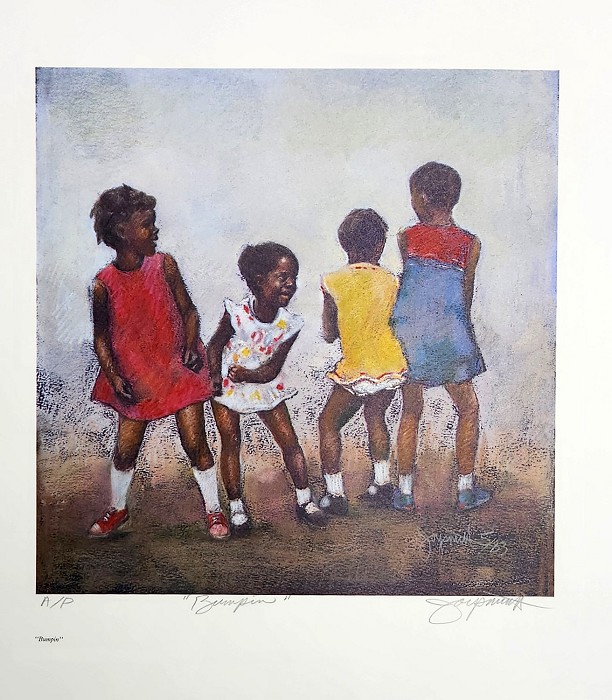 Brenda Joysmith Bumpin  Giclee On Paper Artist Proof is eligible for layaway in 3 equal payments of $331.67 over 60 days.

As an option you may also pay for Brenda Joysmith Bumpin - Giclee On Paper Artist Proof using Paypal or with your Amazon Account(*select items). Please note that all orders must be delivered to a physical address verified by Paypal or Amazon. These options are not applicable for orders to be delivered to Military or International destinations.
For Military APO/FPO orders please use our standard checkout. For International Delivery, please click on the International Shipping Icon to see the landed cost to your country. No Sales Tax Except In The State Of Florida.

NOTES: Produced in 1984 From The Tapestry I series..

Brenda Joysmith is more than an artist. All her paintings have a story to tell. "Drawing from careful observation of Black people in their ordinary routines, I select a moment that is particularly expressive, or best characterizes my basic idea. Then I work to create a painting that is both meaningful and enjoyable," explains Brenda. Starting with a realistic portrayal of her subject, Brenda s paintings are also impressionistic, interpreting an experience through the subjective use of color and other visual cues. Bright colors that "turn up the volume" are used to express the spirit of children playing ring games or enjoying a parade. Muted marine colors with soft edges and hazy, blurred figures in the distance best describe the calm mood of a couple with introspective expressions looking out over a bay. Brenda grew up in Memphis, Tennessee, in the 1950s and 1960s with four brothers and four sisters. Much of her work is indeed Southern and nostalgic. Now she has returned to her native Memphis, after living for 25 years in California. She says, "The last 25 years in California have expanded my view of the diversity of Black people. Our experience varies by region, generation, religion or socio-economic status. However, most of our cultural roots take us back to the South. I want to remind us of the strengths and positive substance of that experience, connecting with the universal and the timeless." It is the viewer¹s recognition of these elements and the emotional response to these memories that bring the works of art to life. In 1984 she self-published her first print portfolio of six paintings titled Tapestry. Notably, it is the Tapestry Collection of six limited edition prints. Ms. Joysmith has won numerous awards over the years and her work appears in many prestigious galleries and museums. Over the years, Brenda's art work has received valued exposure through electronic media as it has been displayed on the sets of both network television series (The Cosby Show, A Different World, Amen, Family Matters, Sinbad, In The Heat Of The Night, Sparks, Good News, The Gregory Hines Show, The Jamie Foxx Show, Malcolm and Eddie, The Hughleys, and Cosby) and feature films (Philadelphia, Lethal Weapon III, Ghost Dad, House Party II, Jason's Lyric, A Family Thing, A Preacher's Wife, Love and Basketball, Music of the Heart, All That Glitters, and Kingdom Come). Brenda's original pastel paintings are included in many prestigious individual, corporate, and organization collections; including, Maya Angelou, the Honorable Willie Brown, Roberta Flack, The William King Collection, Dr. Catherine Lowe, Dr. Calvin McLarin, Oprah Winfrey, Alpha Kappa Alpha National Sorority, Chicago's E H S Bethany Hospital Birthing Unit, The Colgate-Palmolive Company Permanent Collection, Fillmore Fell Corporation, MBNA, National Council of Negro Women, National Organization of Black Law Enforcement Executives (NOBLE), San Francisco Art Commission, San Francisco's Skilled Mental Health Nursing Center, Sigma Gamma Rho National Sorority, The Wimmer Companies, and the U.S. Embassy Ambassador's residence in Lesotho, South Africa. 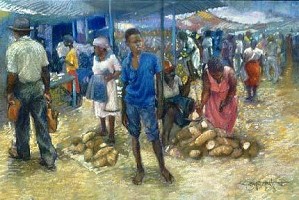 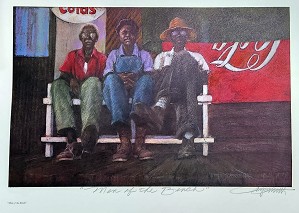 Brenda Joysmith Men On The Bench 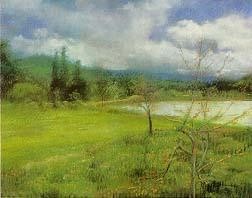 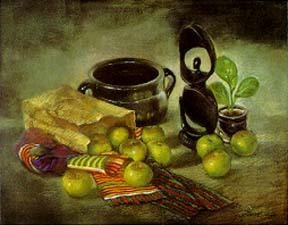 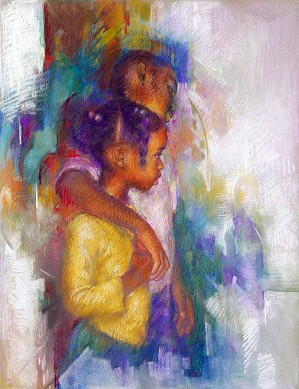 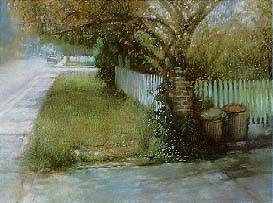