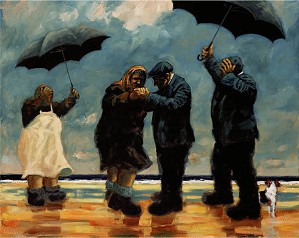 I was born in 1960 into the small mining community of Springside a few miles outside the town of Kilmarnock on the west coast of Scotland. Life within the small Scottish village was very traditional and although I grew up in the 60 s era it felt more like the 40 s. My formative years were spent in the company of old men dressed in dark suits smoking woodbines partnered with large missile-shaped women decked out in headscarves and pinnies. My father worked for British Rail and I got great pleasure from simply sitting in the atmospheric steam filled stations which even today I find are the most romantic, nostalgic places to be. Many of my most romantic paintings are set within that very atmosphere  I guess I m just a big old fashioned nostalgic romantic at heart! It therefore comes as no surprise to many that my favourite film is The Quiet Man . I escaped school in 1976 and eventually fled Springside to set myself up in Newcastle-upon-Tyne. This jump from sleepy peacefulness to hustle and bustle was like going from the frying pan straight into the fire. I found Newcastle had, and still has, its fair share of characters locally known as Gadgies which fed me much inspiration later on in life when I finally discovered my destiny as an artist. After a number of different jobs I finally settled down in 1988 to become a professional artist. I am completely self-taught and after many years of developing my own style in art I turned to images remembered from my childhood and used the local Tyneside Gadgies as models in my paintings. The past couple of years have been especially exciting as my work has taken on a life of its own. Sales have gone through the roof and everyone seems to be taking notice of these solitary figures I create. I m continually surprised to see the effects my paintings have on people, on many occasions I ve had women moved to tears absorbed by a painting that evokes memories of their father or grandfather. After a number of sell out exhibitions one of my paintings was entered in the Daily Mail s Not the Turner Prize . Ten thousand works were entered and my painting was chosen as one of the finalists which were exhibited at the Mall Galleries in London.