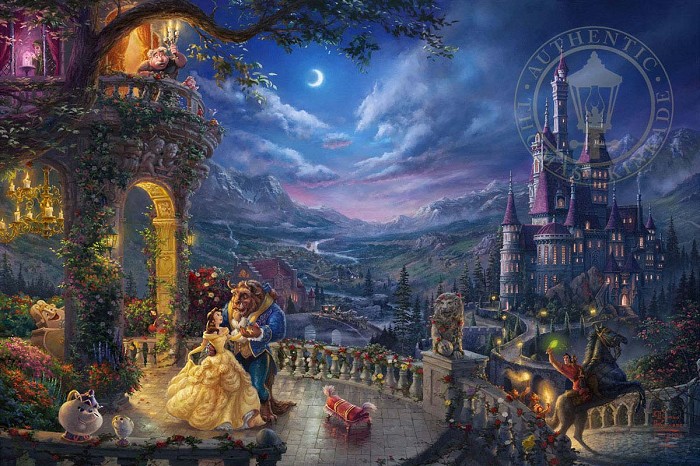 NOTES: Beauty and the Beast Dancing in the Moonlight. In 1991, Walt Disney Pictures released their third Renaissance Period film, Beauty and Beast. Now Disney's cherished portrayal of true love has been captured with its entire cast in a narrative panorama by Thomas Kinkade Studios in Beauty and the Beast Dancing in the Moonlight. Created in celebration of the 25th Anniversary of Disneyï¿½s Beauty and Beast film, this highly collectible Limited Edition Art is the third Beauty and the Beast image in the Disney Dreams Collection and the first to be set under the dreamy moonlit sky. This special painting celebrates the beauty of true love and incorporates favorite characters, bringing them to life on canvas.

* This scene takes place in the late 1800s in France, upon the garden veranda of the Beastï¿½s castle, overlooking the village.
* Belle's iconic beautiful yellow ball gown is perfectly illuminated by both the nighttime moon and the candle-lit chandelier.
* The lovable Footstool playfully dances at the feet of Belle and the Beast.
* Potts speaks gently to her little Chip as they sit upon the limestone railing.
*As Wardrobe peaks from behind the rose-covered column, Lumiere lights the way for Belleï¿½s father, Maurice, and Cogsworth to catch a glimpse of their love.
*Much like the film, the role of the Enchantress in the painting is small. She can be found in the top left corner of the piece. Depicted in an eerie violet hue, she looms over the last single rose petal as if she were trying to speed up time, forcing the Prince to remain a beast forever.
* Upon his black horse and armed with envy and his blunderbuss, Gaston is shown closing in on the Beast with a crowd of angry villagers moments before their violent meeting. . 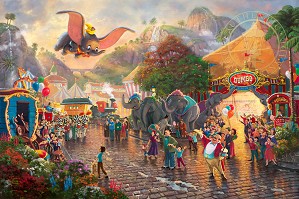 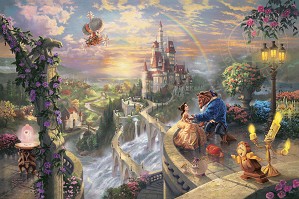 Thomas Kinkade Disney Beauty and the Beast Falling in Love 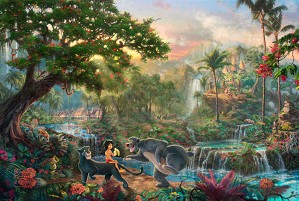 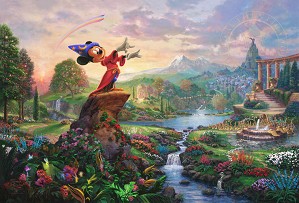 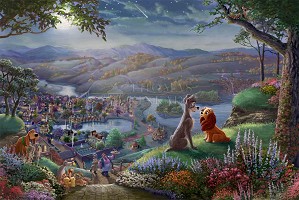 Thomas Kinkade Disney Lady And The Tramp Falling In Love 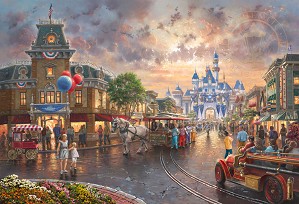