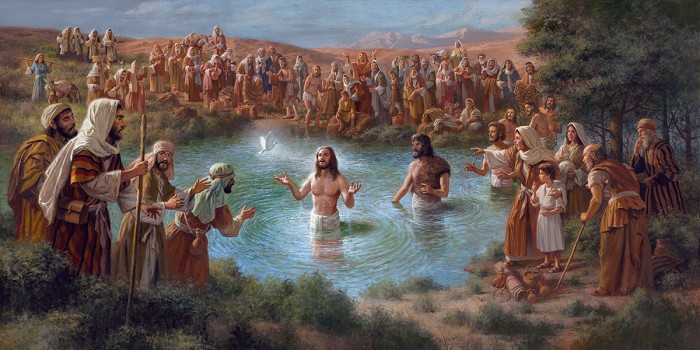 James Seward This Is My Son By James Seward Canvas Signed & Numbered   is eligible for layaway in 3 equal payments of $116.67 over 60 days.

As an option you may also pay for James Seward This Is My Son By James Seward Canvas Signed & Numbered using Paypal or with your Amazon Account(*select items). Please note that all orders must be delivered to a physical address verified by Paypal or Amazon. These options are not applicable for orders to be delivered to Military or International destinations.
For Military APO/FPO orders please use our standard checkout. For International Delivery, please click on the International Shipping Icon to see the landed cost to your country. No Sales Tax Except In The State Of Florida.

This is My Son by James Seward Canvas Signed & Numbered

NOTES: Artist James E. Seward has created the definitive painting featuring the Baptism of Christ. Including more than 55 characters and an authentic setting along the River Jordan, Seward captures the essence of the moment when God's voice came from heaven saying, "This is my Son, whom I love, with him I am well pleased." Each onlooker has his or her own personality and reaction to hearing God's voice..

This Is My Son By James Seward Canvas Signed & Numbered   by James Seward  is signed by the artist and comes with a certificate of authenticity.

James Seward was born in Alabama, and raised in Tennessee. He spent summers with his grandparents in the wild back-country of Alabama. When he was six, his grandfather bought him his first set of oil paints, and as a young child he often painted his grandparents by lamp-light, to their great astonishment. "From the time I was five years old, I was continually painting and drawing in that great environment," the artist remembers with fondness. After military service, Seward spent a year studying art under Howard Boyd Johnson at Watkins Institute in Nashville. In 1947, he enrolled at the Art Institute of Chicago, where he met his wife, Lyn. A year later they were married. After graduation, Seward apprenticed at two Chicago commercial art studios, but in 1954, the family moved to Cleveland, Ohio. After a year with an agency, he joined Union Gospel Press for the next six years. Since that time, Seward has been self-employed as a freelance illustrator and painter and has created works for most of the large protestant denominations including Standard Publishing in Cincinnati, the Methodists and Baptists in Nashville, the Concordia Lutherans in St. Louis, and the Nazarene Publishing House. Although the artist had attended church since childhood, after leaving for the Navy in 1944, he dropped his church attendance. In 1953, two former friends with whom he d lost contact felt moved to pray for his salvation. In Cleveland, James and his family had moved near from a very devout Christian. Out of friendship they attended church with him, and in 1954 Jim and Lyn gave their lives to Christ. Currently Jim is an ordained minister for the "Christ-Life Fellowship" headquartered in Dallas, Texas. He has spoken around the United States as well as in South Africa. He writes articles, makes teaching tapes and works on religious books. His religious paintings express his passion for Christ. Seward has completed over 22 illustrations for a Doubleday book entitled, Ancient Greece. In 1987 and 1989, he was one of 100 artists from around the country picked for the National Arts in the Parks Competition. James E. Seward has been commissioned for portraitures by many organizations. His paintings grace the walls of such companies as the General Motors Corporation, the Wells Fargo Bank, The McDonald Investment Company, and the Will Rogers Museum in Oklahoma. "I try not only to inform, but to move and delight with my artwork…I want the viewer to have an emotional reaction to each painting. That s what makes it a work of art rather than just an illustration." - James E. Seward