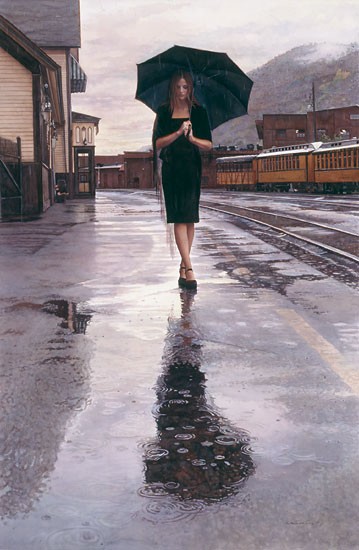 Steve Hanks Waiting in the Rain  Canvas is eligible for layaway in 3 equal payments of $198.33 over 60 days.

As an option you may also pay for Steve Hanks Waiting in the Rain - Canvas using Paypal or with your Amazon Account(*select items). Please note that all orders must be delivered to a physical address verified by Paypal or Amazon. These options are not applicable for orders to be delivered to Military or International destinations.
For Military APO/FPO orders please use our standard checkout. For International Delivery, please click on the International Shipping Icon to see the landed cost to your country. No Sales Tax Except In The State Of Florida.

NOTES: After a period of personal loss, Steve Hanks began a series of paintings visualizing his healing process. This inspiring series, which can be found in its entirety in the new book Moving On: The Art of Steve Hanks, follows the artist’s emotional journey from despair to hope. Waiting in the Rain is one of the last paintings in the healing series.
“At this point I had come out of my sadness. I began to think about the future. I thought about the kind of person I would want to come into my life,” says Hanks. “Waiting in the Rain is the visualization of that person, someone supportive and faithful. We would all like to have someone there waiting for us when return from a trip.”
Other Greenwich Workshop Fine Art Limited Editions from the healing series include A New Beginning and New Shoreline.
.

Waiting in the Rain  Canvas by Steve Hanks  is signed by the artist and comes with a certificate of authenticity. 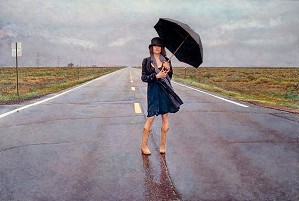