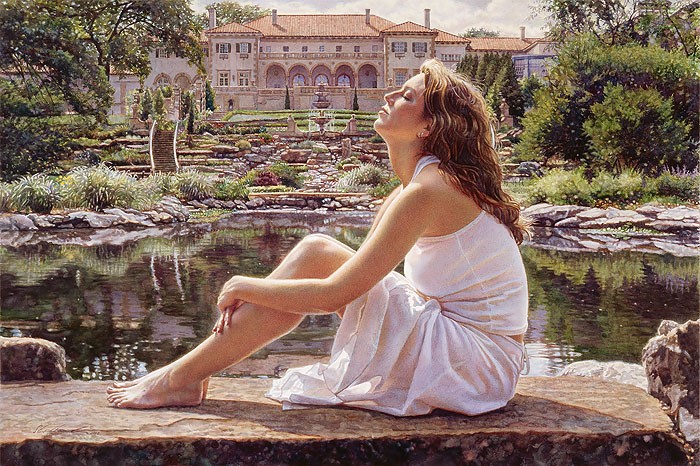 Steve Hanks To Believe  Canvas is eligible for layaway in 3 equal payments of $181.67 over 60 days.

As an option you may also pay for Steve Hanks To Believe - Canvas using Paypal or with your Amazon Account(*select items). Please note that all orders must be delivered to a physical address verified by Paypal or Amazon. These options are not applicable for orders to be delivered to Military or International destinations.
For Military APO/FPO orders please use our standard checkout. For International Delivery, please click on the International Shipping Icon to see the landed cost to your country. No Sales Tax Except In The State Of Florida.

NOTES: “The Grand Canyon is not the most beautiful and interesting thing in the world I could choose to paint―the human figure is. Beyond its surface variety and beauty, the depth of expression the human figure is capable of is immense,” relates Steve Hanks. “Additionally, each viewer’s interpretation of what they see will be based on their own individual experiences. So when I paint a painting of a woman deep in thought, the most compelling part of the painting is the part I have left out―uncovering what the woman must be thinking.”

Steve Hanks may not tell us exactly what this woman is thinking, but he always leaves us with some clues to help interpret. He uses sunlight not only to reveal beauty but as a metaphor to connote revelation or understanding. Light can emanate from a person as much as they can reflect it. Small bodies of water are calm and safe places as opposed to the vast and unpredictable sea. A lifted head conveys joy and confidence.

But none of the above matters much if the artwork itself is not being created by a master. This Greenwich Workshop Fine Art Edition of To Believe captures all the beauty and grace of the Steve Hanks’ original. You can almost smell the water in the reflecting pool, experience the sun on the woman’s face and feel the heat emanating from the stone on which she sits.
.


To Believe  Canvas by Steve Hanks  is signed by the artist and comes with a certificate of authenticity.