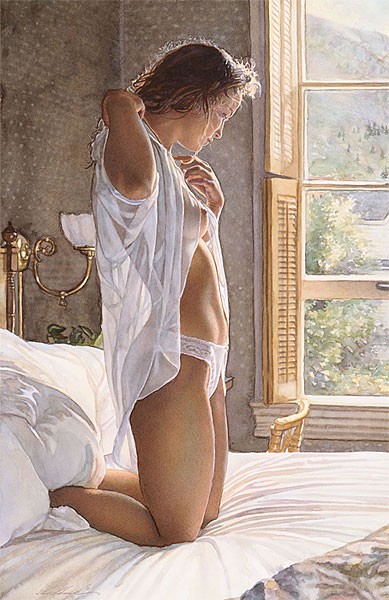 Steve Hanks Time Standing StillANNIVERSARY EDITION ON  Canvas is eligible for layaway in 3 equal payments of $165.00 over 60 days.

As an option you may also pay for Steve Hanks Time Standing StillANNIVERSARY EDITION ON - Canvas using Paypal or with your Amazon Account(*select items). Please note that all orders must be delivered to a physical address verified by Paypal or Amazon. These options are not applicable for orders to be delivered to Military or International destinations.
For Military APO/FPO orders please use our standard checkout. For International Delivery, please click on the International Shipping Icon to see the landed cost to your country. No Sales Tax Except In The State Of Florida.

NOTES: As is often the case with Steve Hanks’ nudes, there is sense of privacy expressed by his models, something he refers to as “introspective solitude.” His exceptional watercolor technique is the perfect medium for capturing the quality of light and shadow that is as much the subject of this painting as the woman.
“I like to consider those times when we make life’s major decisions,” says artist Steve Hanks, “when we are alone with our thoughts, when we both confront and challenge ourselves. I titled this Time Standing Still because we all want time to stop when we experience beautiful moments in life, But life can never stop, except in art.”
.

Time Standing StillANNIVERSARY EDITION ON  Canvas by Steve Hanks  is signed by the artist and comes with a certificate of authenticity.