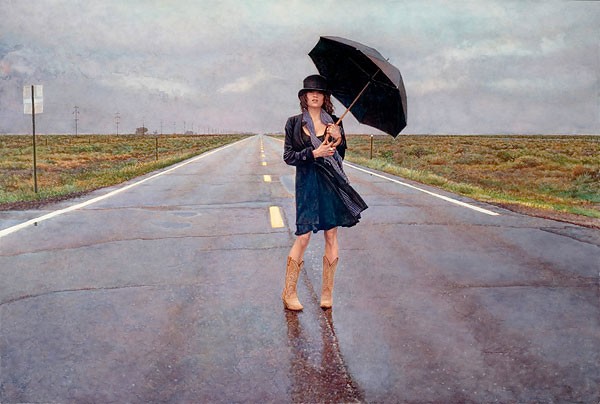 Steve Hanks The Road Less Traveled MASTERWORK EDITION ON  Canvas is eligible for layaway in 3 equal payments of $283.33 over 60 days.

As an option you may also pay for Steve Hanks The Road Less Traveled MASTERWORK EDITION ON - Canvas using Paypal or with your Amazon Account(*select items). Please note that all orders must be delivered to a physical address verified by Paypal or Amazon. These options are not applicable for orders to be delivered to Military or International destinations.
For Military APO/FPO orders please use our standard checkout. For International Delivery, please click on the International Shipping Icon to see the landed cost to your country. No Sales Tax Except In The State Of Florida.

NOTES: “I find those straight, long roads that transverse the barrenness of nowhere so intriguing. Who lives out there, what do they do? Imagine having grown up in one of those small Midwestern towns and what it is like to decide it is time to leave that small-town life behind?” asks Steve Hanks. “I think we all want to believe we would take the road less traveled, but are we prepared for the inclement weather or the time that may pass before opportunity offers us a ride? Certainly, this girl radiates inner confidence and everything about her, right down to her off-beat clothes, represents one who would choose to take the road less traveled.”

One of the unique qualities of this work is that that the original was a watercolor painted on Clayboard«. The paints sit on top of the Clayboard« surface rather than being absorbed into it as it does with traditional watercolor paper. The sharper color this creates comes alive all the more when varnished, a technique watercolorists don’t have the chance to employ.
.

The Road Less Traveled MASTERWORK EDITION ON  Canvas by Steve Hanks  is signed by the artist and comes with a certificate of authenticity. 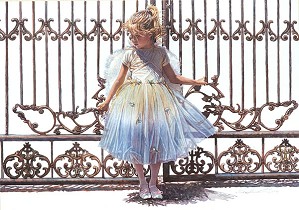