Steve Hanks The Journey is the Goal ANNIVERSARY EDITION   is eligible for layaway in 3 equal payments of $131.67 over 60 days.

As an option you may also pay for Steve Hanks The Journey is the Goal ANNIVERSARY EDITION using Paypal or with your Amazon Account(*select items). Please note that all orders must be delivered to a physical address verified by Paypal or Amazon. These options are not applicable for orders to be delivered to Military or International destinations.
For Military APO/FPO orders please use our standard checkout. For International Delivery, please click on the International Shipping Icon to see the landed cost to your country. No Sales Tax Except In The State Of Florida.

The Journey is the Goal
ANNIVERSARY EDITION - SH00080

NOTES: “Each time I do an interview I am asked what my goals are. My answer is always the same; ‘The journey is the goal.’ I liked the idea of a painting with that title. One summer I took my kids to Aspen to have them model for it,” relates Steve Hanks.

“I found a perfect house on a shaded street and posed them there, walking past it with the wagon. The concept is that people too often focus on getting that great house or career position and spend their lives working for it. In the process, they miss out on the special times they could have spent together as a family before their children have grown up. If there is one thing an artist is taught early on, it’s good to keep the important things in the foreground.”

The Journey Is the Goal is an Anniversary Edition Fine Art Giclèe Canvas of one of Steve Hanks’ all-time favorite images. Often, the most powerful and enjoyable works of art are the ones that appeal to our most basic and universal emotions.
.


The Journey is the Goal ANNIVERSARY EDITION   by Steve Hanks  is signed by the artist and comes with a certificate of authenticity. 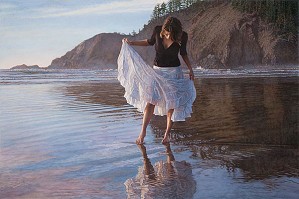