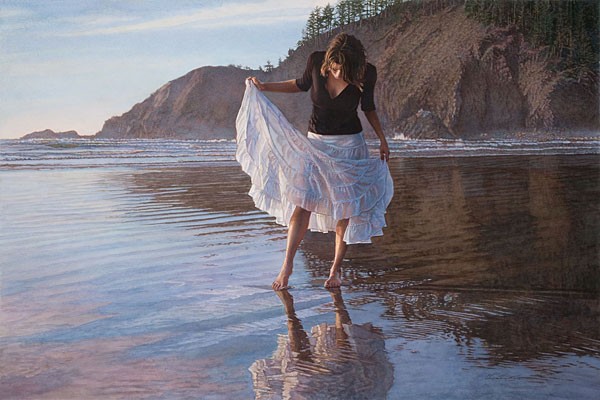 Steve Hanks Reflecting on Indian Beach Limited Edition  Print is eligible for layaway in 3 equal payments of $183.33 over 60 days.

As an option you may also pay for Steve Hanks Reflecting on Indian Beach Limited Edition - Print using Paypal or with your Amazon Account(*select items). Please note that all orders must be delivered to a physical address verified by Paypal or Amazon. These options are not applicable for orders to be delivered to Military or International destinations.
For Military APO/FPO orders please use our standard checkout. For International Delivery, please click on the International Shipping Icon to see the landed cost to your country. No Sales Tax Except In The State Of Florida.

NOTES: With Reflecting on Indian Beach Steve Hanks shows just why he is regarded as the best watercolor artist painting in America today. It is a definitive combination of beauty, emotion and environment. “There is a big difference between the beaches of the Northern Pacific Coast and those down in Southern California,” says Hanks. “The surf rolls in over long shallow flats. The waves pound and boil for great distances, creating in the air thick moisture. This subtly diffuses the light creating an atmosphere palatably different than that on the beaches farther south.”

What began in his mind as a relatively straight-forward painting took Hanks over a month to create. He became absorbed in building the large reflective areas of the tidal flats. It seems as if we can reach in ourselves and run our fingers through the cool, moist sand at this serene and magical place where tree-lined mountains slip beneath the surface of the sea.
.

Reflecting on Indian Beach Limited Edition  Print by Steve Hanks  is signed by the artist and comes with a certificate of authenticity.