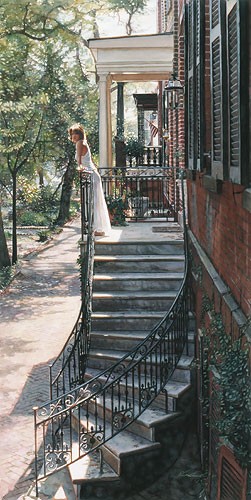 Steve Hanks A New Beginning MASTERWORK EDITION ON  Canvas is eligible for layaway in 3 equal payments of $283.33 over 60 days.

As an option you may also pay for Steve Hanks A New Beginning MASTERWORK EDITION ON - Canvas using Paypal or with your Amazon Account(*select items). Please note that all orders must be delivered to a physical address verified by Paypal or Amazon. These options are not applicable for orders to be delivered to Military or International destinations.
For Military APO/FPO orders please use our standard checkout. For International Delivery, please click on the International Shipping Icon to see the landed cost to your country. No Sales Tax Except In The State Of Florida.

NOTES: “Any healing process can be a lengthy one,” says Steve Hanks. “Often it can be helped by attempting to visualize the future. Such is the inspiration for A New Beginning. This is, in fact, the final painting in a series of three that have used the ascent of the staircase to track this woman’s passage. By reaching the landing at the top, she has completed her growing process and is ready to move on. This staircase reminds us to take things in life one step at a time, that a promise of reward and satisfactionùthe top of the staircaseùand a new view of the world around you, is a situation you can help create for yourself.”
“In my paintings, when there’s a sidewalk or shoreline going off into the distance, I sometimes use this area to represent people in the subject’s mind. You may notice that in A New Beginning that there are no people down the sidewalk, and that the background is left blank; the woman has visualized an open road in her future. Additionally, I used a different model for this painting than I did in the first two, to further illustrate the metamorphosis: you are not the same person at the top of the staircase that you were at the bottom.”
Join us in welcoming Steve Hanks to the Greenwich Workshop family of artists. We are pleased to offer A New Beginning as one of his first fine art limited editions, an offering even more symbolic as we too look forward to a long and beautiful road ahead.
.

A New Beginning MASTERWORK EDITION ON  Canvas by Steve Hanks  is signed by the artist and comes with a certificate of authenticity.