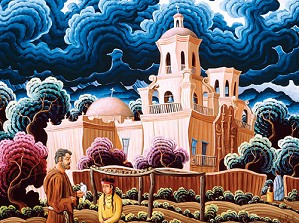 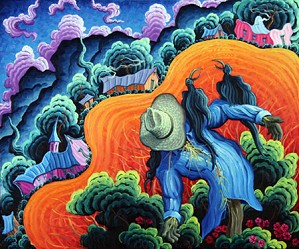 The bold, brilliant and heavily impastoed paintings of Kim Douglas Wiggins (b. 1959, living in New Mexico) have been eagerly acquired by private collectors, corporations and museums for almost three decades. Yet his oeuvre continues to unfold like a time-lapse film of flowers, undulating with the same energy that he packs into each composition. From deep roots in his native New Mexico through the influence of three years in Europe and the inspiration of Expressionism, American Regionalism and Hispanic Folk Art, Wiggins has distilled the very nectar of his environment in canvases that capture the warmth and texture of subjects that are a part of his soul. Although primarily self-taught he was encouraged to pursue his unique style through guidance and critique from regional masters Alexandre Hogue and William Lumpkins. His only formal instruction came through a master s class at the Santa Fe Art Institute with his neighbor Henriette Wyeth. Wiggins often cites the influences of Wyeth s husband, Peter Hurd when discussing sources of influence on his work. Much like Hurd, Wiggins is among only a handful of artists who derive their roots from the passionate terrain that has attracted so many.